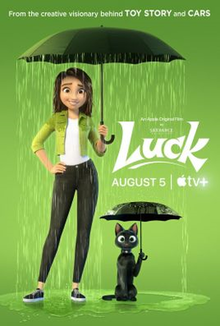 Not suitable under 5; parental guidance to 6 (scary scenes)

Sam Greenfield (voice of Eva Noblezada) is an orphan who always seems to have bad luck. Now she is 18, she is being moved out of care and into a place of her own, leaving behind her young friend, Hazel (Adelynn Spoon). Sam tells Hazel she will always be there for her and hopes she will find her ‘forever family’. Alone in her apartment, Sam starts a new job in a grocery store but, as usual, everything goes wrong for her. Sam laments her woes to a cat called Bob (Simon Pegg), who leaves behind a lucky penny. Sam plans to give the penny to help Hazel find her adoptive family. While Sam has the penny, her luck does seem to change around, however, when she accidentally flushes it down the toilet, she feels her luck has run out.

Hoping Bob might be able to give her another lucky penny, Sam chases after him, following him through a portal to the Land of Luck. This is a magical land full of leprechauns, a dragon, a unicorn and a bossy captain. Sam is disturbed to find that beneath the Land of Luck is the Land of Bad Luck where things aren’t so pleasant. She discovers that the leprechauns mix up the good and bad luck and send them out randomly into the world, which seems to her rather unfair. However, she discovers that not all bad luck is a bad thing as it can teach us important life lessons.

There is some slapstick violence in this movie in which no-one is hurt, including:

Luck is an animated movie about the fact that some people seem to have better luck in life than others. The film takes place mainly in a magical land of bright colours and gentle characters, where everything seems to move seamlessly like clockwork. It does also show the other side to good luck, where things don’t seem to go so well and, as such, it displays both sides of what happens to most people in life. The film is made for all ages but due to some scary characters and scenes, and the use of infrequent coarse language, it isn’t suitable for children under 5 and parental guidance is recommended for children aged 5-6 years old.

The main messages from this movie are that bad luck can sometimes be a good thing as it makes you appreciate the good things in life; and that families can come in many different forms.