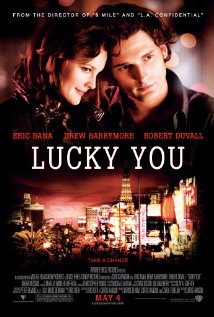 Huckleberry Cheever (Eric Bana) is a professional gambler who loses as often as he wins. His life is dominated by his famous father, L.C.Cheever (Robert Duvall) who has won the National Poker Tournament twice. Cheever betrayed and alienated Huck’s mother by pawning her wedding ring for which Huck never forgave him. Huck is determined to enter the National Tournament but bad luck dogs him and he seems unable to raise the entry fee.
Huck meets young and refreshing Billie (Drew Barrymore) who manages to get through to him that there is more to life than winning and losing. Huck manages to get to the National Tournament and face his father in the event, but succeeds at something more important than winning the tournament.

Apart from the above-mentioned violent scene, there is nothing particularly disturbing for this age group.

Apart from the above-mentioned violent scene, there is nothing particularly disturbing for this age group.

In addition to the above mentioned violent scene, there are some scenes in this movie that could disturb children aged eight to thirteen, including the following:

Lucky You is a romantic drama that draws heavily on the game of poker, which will probably limit its appeal. It is well acted, however, and shows some refreshing honesty.

The main messages from this movie are that there is more to life than winning and losing and that giving and receiving shouldn’t be so complex.

This movie could also give parents the opportunity to discuss with their children attitudes and behaviours, and their real-life consequences, such as the devastating and addictive effects that gambling can have on people.