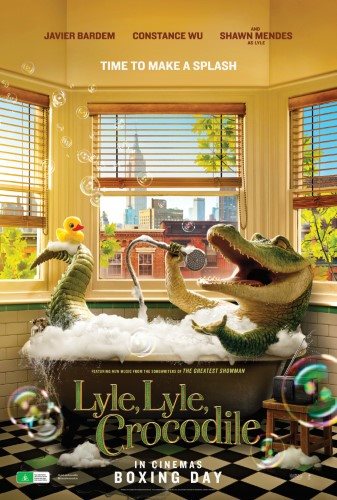 Not suitable under 6; parental guidance to 8 (themes, violence, scary scenes)

Failed performer Hector Valenti (Javier Badem) is looking for something different to save his career, when he buys a singing baby crocodile. As Lyle (voiced by Shawn Mendes) grows up, he turns into a fine performer and their double act seems bound for success. However, at their debut performance, Lyle has stage fright and freezes, which means they are thrown out of the theatre and Hector loses the money he has invested in the show. Forced to give up his New York brown-stone house, Hector leaves Lyle in the attic, hoping that someone will care for him.

The family who move into the house are the Primms – a young boy named Josh (Winslow Fegley), his father who is a teacher (Scoot McNairy), and his stepmother who is a cookbook author (Constance Wu). Josh is at first nervous about everything in the city, including the noise, crowds, and his new school. When he encounters Lyle in the attic, he is initially scared but they soon become friends and eventually Lyle becomes part of the family as they all start to relax and have fun together. The only problem for the family is their appropriately named downstairs neighbour, Mr Grumps (Brett Gelman), who constantly complains about the noise coming from upstairs and wants the family evicted. Things come to a head when Hector returns and tries to revive Lyle’s performing career. Lyle is taken away and Hector and Josh must work together to save him.

It is, however, finally up to Lyle to take the action which will make things right for him and his new family.

There is some very mild, coarse language in this movie, including:

Lyle, Lyle, Crocodile is an entertaining, live-action musical which is likely to be enjoyed by most of the family. The film is based on a popular picture book of the same name by Bernard Waber. Lyle is an engaging character, Josh is courageous and loyal to Lyle, and the Pimms are a loving family. Also, the song and dance numbers are catchy and fun. However, because of scary scenes and themes, the film is not suitable for children under 6, and some slightly older children may need some parental guidance. The Australian Classification Board have acknowledged this in the consumer advice guidelines given, in spite of giving the film a G rating.

The main messages from this movie are the importance of families; the value of teamwork and loyalty; and the benefits of working to overcoming your fears and being prepared to take risks.

This movie could also give parents the opportunity to discuss with their children the value of both blended and found families. Josh’s birth mother died when he was very young but he now lives as part of a loving family with his father and stepmother. In addition, the Pimms become a family for Lyle, and Hector has to acknowledge how important this is for the happiness of his crocodile.

Some children may also be interested in discussing the fact that Josh’s stepmother seemed very concerned about healthy eating but became more relaxed as the family began to settle in and enjoy themselves. This, together with the scene in which Josh and Loretta the cat share Lyle’s meal from a dumpster, could lead to some interesting discussions about food!