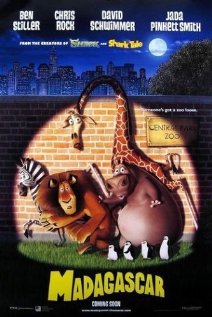 Madagascar is the story of four friends living a pampered life at the Central Park Zoo. Marty, a free-spirited zebra, dreams of one day returning to the wild, while his best friend Alex, a spotlight loving Lion, relishes the fame and luxury afforded him by the zoo. Gloria, a practical and pragmatic hippopotamus, and Melman, a hypochondriac giraffe, often find themselves caught in the middle while trying to support both friends.

The adventure begins when, after his tenth birthday, Marty decides to sneak out of the zoo and get a small taste of freedom on the streets of New York. His three friends discover that he is missing and set out to find him. This stunt eventually lands all four friends aboard a steamship destined for a wildlife reserve in Kenya. They never reach their destination, as their containers are flung overboard in the middle of the Indian Ocean. Washing up on the shores of Madagascar, the friends must come to terms with the fact that they are now on their own. Once they are finally able to put their differences aside and work together, the four learn valuable lessons about both freedom and friendship.

There is frequent violence in this movie, some set in a comic context and some not. Parents are reminded that although comic violence may appear benign, and children often enjoy it, over-exposure to comic violence can lead children to believe that violence doesn’t really hurt. Examples of violent scenes include:

In addition to the above mentioned scenes, there are a few potentially disturbing scenes in this film, including:

Children in this age group could also be disturbed by the above mentioned scenes.

Some children aged eight to thirteen could be disturbed by the above mentioned scenes.

There are two scenes with sexual references:

There are two implicit references to alcohol:

While the film contains no course language it does contain a small amount of name calling.

The movie’s main message is that freedom can have a price and that most things in life worth having lose their value when you have no one to share them with. Some values and issues that parents may wish to discuss with their children are: friendship, loyalty, the predatory instincts of animals and what it means to be truly free. Parents may also wish to remind parents that violence does actually hurt.