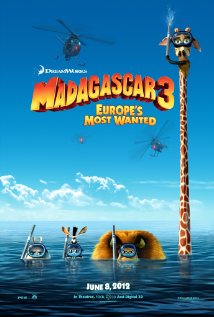 Not recommended under 5, PG to 7 (Violence)

This animated film features many of the characters from previous Madagascar adventures.  The opening sequence depicts former Central Park zoo animals Alex the lion (voice of Ben Stiller), Marty the zebra (Chris Rock), Gloria the hippopotamus (Jada Pinkett Smith), Melman the giraffe (David Schwimmer), and a group of lemurs headed by King Julien XIII (Sacha Baron Cohen) still stranded in the plains of Africa.  Too late, they discover that the penguins, led by Skipper (Tom McGrath) have built an aircraft in which to leave Africa.  Following the penguins’ departure, the four friends despair that they will never leave Africa, and so decide to try snorkelling their way to Europe.

Initially, all goes well and the group finally locate the penguins in Monaco.  In the weeks before the reunion, the penguins have made the most of the gambling opportunities in Monte Carlo, and won a small fortune, which they intend to use as a means to return to New York. Unfortunately, their plans are thwarted by French animal control officer, Captain Chantel DuBois (Frances McDormand), who recognises the missing zoo animals and seeks to capture and return them to New York.

In a bid to escape DuBois and her officers, the animals join a travelling European circus troupe.  At first, the zoo animals lie about their backgrounds in order to be accepted by the established circus performers.  As the weeks pass, however, the new recruits build friendships with troupe members such as Gia the jaguar (Jessica Chastain), Vitaly the Russian tiger (Brian Cranston), Stefano, the Italian sea lion (Martin Short) and Sonya the bear (Frank Welker).  Eventually, these new relationships are tested when the zoo animals’ initial deceptions are uncovered and their ongoing freedom is threatened.

Deception; betrayal; separation from loved ones; loss of personal freedom

There are many incidents of violence perpetrated by people towards animals in this movie, such as:

There are some depictions of violence perpetrated by animals in response to human aggression, such as when:

There are also several violent episodes occurring between animals, such as when:

There are some substitute swear words and a number of put downs, including:

Madagascar 3: Europe’s most wanted is an entertaining animated family comedy, although it contains frequent violence, some scenes that may scare younger children, and some coarse language that children may imitate.  The main message of the movie is the importance of trust and loyalty.

The film could also be used as a springboard for discussions with children about geography (given that the animals travel across three continents during their escapades).