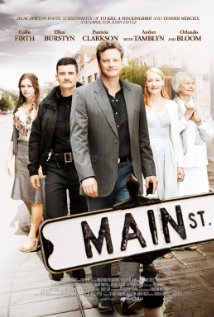 Not recommended under 10, PG to 13 (Lacks interest for young children, Themes)

This is a gentle story about a small southern town and the people in it. This town used to be a thriving metropolis. Its wealth came from a large tobacco industry and as this industry declined so did the town. Now many of the young people have left and there are few jobs and very little new development.

Miss Georgiana Carr (Ellen Burstyn) owns a large house and an old tobacco warehouse which she rents so that she can cover her expenses. Even so she is running out of money and may have to sell her house. She was born in the house and it’s the only place that she has ever lived so she is extremely upset at the prospect.  Desperate for money, she is not concerned about who rents the warehouse and doesn’t ask any questions.

Georgiana rents her warehouse to Gus Leroy (Colin Firth) who works for a company that stores hazardous waste. Not only will he pay Georgiana more money that she has received in the past but he also wants to extend the lease which means that she can keep her house. In the meantime he has talked to the mayor about a controversial plan to save the town by building a waste disposal plant there.

This scenario is a catalyst for several stories that are interwoven throughout the movie. These involve Georgiana, her niece Willa (Patricia Clarkson), Gus Leroy, a young policeman called Harris (Orlando Bloom) and Mary (Amber Tamblyn), the girl he wants to be with. Ultimately there is an incident related to the waste disposal that makes all of them reassess their lives.

Main Street is an unusual movie that could almost be written for theatre. It deals with change and highlights how a change can make people rethink their own lives

The main message from this movie is that you need to think about the impact of your work rather than just doing a job for the pay. Parents may also wish to discuss the problems associated with hazardous waste and its disposal.