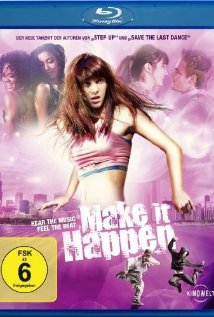 Not recommended under 8 (Lacks interest) PG to 13 (Themes)

Lauryn Kirk (Mary Elizabeth Winstead) dreams of becoming a dancer like her mother but the burden of running the family’s garage business with her brother Joel, (John Reardon) after the death of both parents, has prevented her from attending dance school. She finally decides she must follow her dreams and leaves her small Indiana town to audition for entry to the Chicago School of Music and Dance. She fails the audition but decides to stay in Chicago and gets a job at Ruby’s, a local nightclub. She begins as a bookkeeper, but when her dancing talents are discovered, she moves onto the stage as a nightclub dancer.
Lauryn begins a relationship with disc jockey Russ, (Riley Smith) who encourages her to try out again for the dance school. She has some problems to sort out with Joel as she feels torn between loyalty to him and the business and fulfilling her own ambitions.

Make it Happen is a dance movie with some great dance sequences, mainly aimed at adolescents.
The main message from this movie is that people should follow their dreams.
Values in this movie that parents may wish to reinforce with their children include family loyalty

This movie could also give parents the opportunity to discuss with their children the situation of young women employed as nightclub dancers.