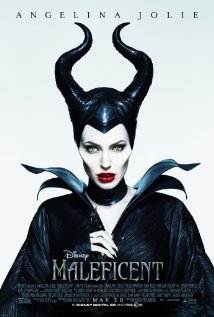 Maleficent is a fantasy adventure film that is a re-imagining of the Sleeping Beauty.  It follows the story of the bad fairy Maleficent (Angelina Jolie), beginning when she is a young fairy who believes in love, peace and compassion. Living in the Moors, a magical realm that has a human kingdom neighbouring it, Maleficent meets and falls in love with a young man named Stefan (Sharlto Copley). However, over the years, his human desire for power and greed take a stronger hold and the two lose contact.

The magic and human realms are soon at war, with the human king wanting to rid his world of fantastical creatures that hold more power and strength than he and his army. Promised that he will become king, Stefan sets up a false situation that enables him to get close to Maleficent, drug her and cut off her wings. She is incapable of flight but still magically very powerful.

Maleficent is blind with rage and, after enlisting the help of Diaval (Sam Riley), a crow that she turns into a man, she takes over the magical realm with her dark and evil magic. When King Stefan has a child, Maleficent sees an opportunity to take revenge and places a curse upon the child: although the princess shall grow in beauty and grace, before the sun sets on her 16th birthday she will prick her finger on a spinning wheel spindle and fall into a sleep-like coma from which she may only ever be awoken by true love’s kiss.

The king orders that his daughter Aurora be taken away and raised in the woods by three fairies, in order to keep her safe and away from any spinning wheels that may have escaped the purge he ordered for the kingdom. Over the years in which Aurora grows up, Maleficent finds herself looking after the girl from a distance - protecting her so that she survives to her 16th birthday. However, she quickly develops a strong fondness for the girl and now seeks to undo her curse.

There is substantial violence within the film, including:

Younger children in this age group may also be disturbed by some of the above-mentioned scenes and themes.

None of concern in the film, but there is associated merchandise aimed at children.

Maleficent and Stefan, and Aurora and a prince, kiss.

There is limited use of substances in the film, including:

Maleficent is a film that depicts the fluid nature of, and complexities inherent within, the concepts of good and evil. Appropriately rated M, it is a dark and adult retelling of the Sleeping Beauty story with violent and disturbing scenes and themes which make it unsuitable for children under 13. The story of the troubled Maleficent raises a number of issues to discuss with teenagers, and parental guidance is strongly recommended for younger teens who may be attracted to the film and allowed to attend.

The film demonstrates that good people can often follow dark paths as a result of trauma and destructive factors outside of their control. It highlights the importance of forgiveness, the beauty of friendship and relationships, and the struggle people may face in their quest to be decent people in a troubled world.