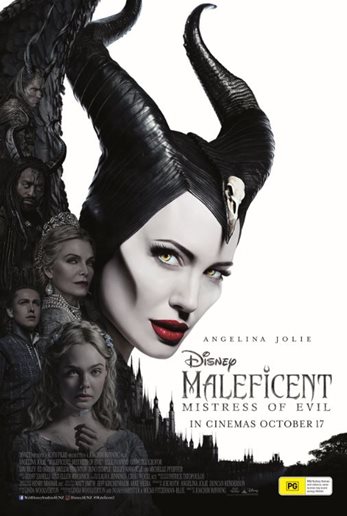 Not suitable under 8, parental guidance to 11 (Violence, themes, scary scenes)

Aurora (Elle Fanning), now Queen of the Moors, accepts a marriage proposal from the kind-hearted Prince Phillip (Harris Dickinson) who has fallen hopelessly in love with her. King John (Robert Lindsay) is delighted and hopes his son’s marriage will secure peace with the fairy folk and unite the kingdoms. His wife, Queen Ingrith (Michelle Pfeiffer), however, is secretly amassing weapons of war as she hopes to annihilate the fairy kingdom once and for all. Maleficent (Angelina Jolie) also opposes the match, however, she agrees to meet the King and Queen for the sake of Aurora. When the evening ends in disaster Maleficent is blamed for a curse upon the King and is shot from the sky by an iron bullet meant to end her life. She is rescued from a watery grave by Conall (Chiwetel Ejiofor), a creature much like herself, who takes her home with him to the last sanctuary of the fae where she learns that she is indeed different but also that she is not alone. Maleficent is, in fact, the last blood descendant of a phoenix-like creature whose powerful strength runs in her veins and gives her abilities others could only imagine. Conall hopes for peace with humankind but Borra (Ed Skrein), a warrior fae, wishes to fight humans and use Maleficent’s powers to win freedom for the fae, no matter what the cost. When Conall is killed in an ambush the fae prepare for war. Meanwhile, Queen Ingrith uses Aurora and Phillip’s marriage as a front to secretly exterminate the fairy folk. In the battle that ensues it looks as though the fairy folk and fae do not stand a chance against the evil of the Queen but when Maleficent is killed saving Aurora their unusual bond and their mutual love may be just the thing to save them all.

War, prejudice against those who look different, violence to solve conflict, disrespect for nature, spreading lies until they are believed.

Maleficent: Mistress of Evil is a fantasy adventure. It features stunning imagery, animation and costumes and, while darker than the first Maleficent movie, there are some powerful messages of tolerance and unity. This is a movie that families with older children are likely to enjoy together.

The main messages from this movie are that love will conquer hate, that curses don’t end but rather are broken and that we should not be defined by our appearance or origins but instead by who we are and what we love and believe in.