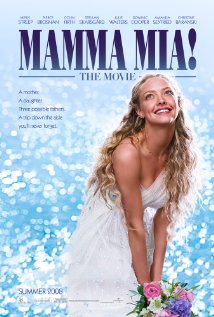 PG to 13 due to themes, sexual references and coarse language.

Sophie (Amanda Seyfried) is about to marry Sky (Dominic Cooper), the man of her dreams. The only thing missing from the perfect wedding that she is planning is her father. The problem is that she doesn’t know who her father is, and neither does her mother Donna (Meryl Streep). Shortly before the wedding Sophie discovers the diary that her mother kept the year she was pregnant and learns of three possible candidates: Harry Bright (Colin Firth), a charming former musician; Sam Carmichael (Pierce Brosnan), the man who broke her mother’s heart, and Bill (Stellan Skarsgard), a daring and now famous adventurer. Convinced that she will know which one is her father the moment she sees him, Sophie secretly invites them all.
Meanwhile Donna is preoccupied with arrangements for the wedding, repairs on her ramshackle villa and the arrival of two old friends Tanya (Christine Baranski) and Rosie (Julie Walters). When she learns of the arrival of the three men she is horrified that they are all there at the same time and, not knowing that Sophie has invited them, is terrified that Sophie will find out. Donna therefore encourages the men to leave while, at the same time, Sophie is begging them to stay.
Chaos abounds when each man independently concludes that he is Sophie’s father. In the process of trying to make it all right, many songs are sung, proposals are made and dreams are realized.

Single parenthood; searching for a parent

In one scene men from the stag’s night crash a hen’s party wearing strange masks. They come from the roof tops, swooping down from all directions. Some of the women scream and scatter. Some children may be frightened by the masks and the chaos of the scene.

There is some coarse language in this movie, including:
“My ass”, “Stupid, reckless, little slut,” “Screw ‘em…”, “Fricken yoga…”

Mamma Mia! is a light, sometimes silly, romantic musical comedy featuring, gorgeous scenery, a catchy soundtrack and a well-known cast.
The main messages from this movie are that sometimes you must take a chance, and risk everything in order to achieve your dreams and that life may turn out better than you could ever have imagined.
Values in this movie that parents may wish to reinforce with their children include determination, self-reliance, loyalty and courage.

This movie could also give parents the opportunity to discuss with their children the importance of communication and honesty in families.