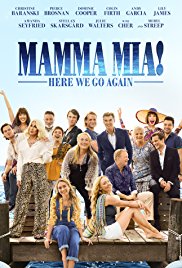 Parental guidance recommended under 13 due to sexual references and adult themes.

Mamma Mia! Here we go again is the sequel to the 2008 hit musical movie Mamma Mia! Once again, we are back on the picturesque and idyllic Greek island of Kalokairi where Sophie (Amanda Seyfried) is mourning the sudden and unexpected death of her mother Donna (Meryl Streep).

To honour her mother’s lifelong dream of creating a hotel in the rustic stone villa that sits above the village, Sophie has finally completed the renovations and now the Hotel ‘Bella Donna” is ready for a grand opening party. The film intertwines this modern-day storyline with nostalgic flashbacks that tell the history of a younger Donna (Lily James), her arrival on the island in the 1970’s and her brief but very passionate romantic encounters with the men that we come to know as Sophie’s 'three fathers'.

There are frequent sexual references and innuendo in this movie, including the following examples:

Mamma Mia! Here we go again is a fun and light-hearted musical that celebrates the music of ABBA against a backdrop of beautiful Mediterranean scenery and rather cheesy nostalgic romance. The characters are all warm-hearted, empathetic, and likeable, and the singing and dancing feel fresh and energetic. There is a lot of sexual innuendo which may concern some parents, so parental guidance is recommended for children under 13. There are also some scenes that may be scary for under sevens.