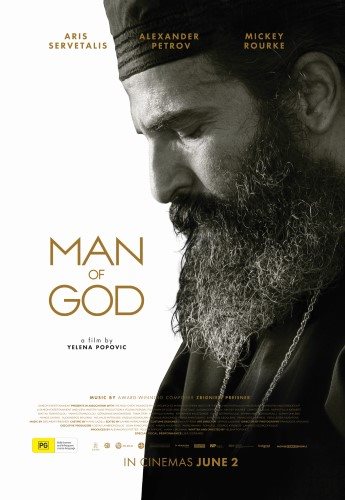 Not suitable under 8; parental guidance to 13 (themes, language, violence). May lack interest under 16.

In 1890, Nektarios (Arias Servetalis) walks the dusty streets of Alexandria in Egypt, ministering to the needs of the people, inspiring them with his sermons, showering them with his limitless compassion, wisdom and love, and doing everything in his power to alleviate their poverty, injustice and suffering. While the population adored him, the bishops and higher clergy grew more and more jealous of the devotion the people felt toward Nektarios. They plotted against him, slandered him and began rumours that Nektarios wanted the Patriarch’s position and that his piety was all an act. Terrified of losing his power, the Patriarch (Nikitas Tsakiroglou) believed the lies and banished Nektarios from Egypt. Despite the fact that the people would have supported him, Nektarios did not want to cause unrest or do anything to hurt the Patriarch so he left quietly and quickly for Greece. However, the slanderers continued to persecute Nektarios, sending letters continuing to defame and denounce him, ensuring that he would not be able to get a position or be able to help or influence anyone. Despite all the persecution and hardship, Nektarios never lost his faith in God. He continued to trust and never gave up hope. Eventually some people began to see past the lies, to the kind and noble soul that lived amongst them. Nektarios was given a Headmaster’s position at a rundown school meant to teach boys academics as well as to guide them to priesthood. Through his wisdom and hard work, Nektarios transformed the school and the lives of those who attended. He went on to establish a monastery for nuns in his later years and, though troubles followed wherever he went, he remained steadfast in his faith, never losing trust in God, and helping countless others find peace along the way. It was this life of constant devotion and of perfect piety that led Church leaders (nearly fifty years after his passing) to declare Nektarios a Saint.

Man of God is a simple, documentary-style film outlining the life of an unassuming, yet heroic man whose life of love and kindness led him to be declared a saint. There are some subtitles in the film and much of the dialogue will probably go over the heads of most children. The film is best suited to older, mature audiences and anyone interested in the authentic retelling of religious history.

The main messages from this movie are to have faith; trust in God; listen to your inner voice; and to forgive those who treat you badly.

This movie could also give parents the opportunity to discuss with their children the importance of forgiving those who wrong us; of having faith even when the world seems to be falling apart; and performing simple acts of kindness, simply for the sake of bringing joy to someone’s heart or a smile to their face.