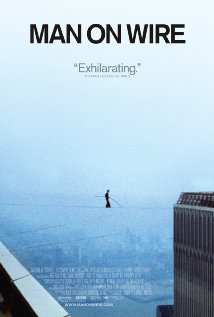 Man on Wire tells the story of how Philippe Petit planned and carried out what has been called the greatest artistic crime of the twentieth century. On August 7th, 1974 Philippe Petit strung a 200 foot tightrope wire 450 meters above the ground between Twin Towers of the World Trade Centre and walked across it, nine times.
Through interviews and re-enactment, the film depicts the relationships between Philippe and his then girl friend Annie Allix, close friend Jean-Louise Blondeau and co-conspirators David Forman, Barry Greenhouse, Jim Moore and Alan Welner. The film shows archival footage of Philippe walking between the spires of Notre Dame Cathedral in Paris and between the pylons of the Sydney Harbour Bridge. Philippe and his co-conspirators descibe how they spied for weeks on the Twin Towers, tricked their way in using fake ID cards and hauled nearly one ton of equipment to the top floor.
The film contains no live footage of the walk or re-enactment of it, with the event represented through still images and commentary by Philippe and the team members. Following the walk Philippe is arrested, taken in for psychiatric evaluation and then released. The media hail Philippe a hero and we hear accounts from eyewitnesses telling how watching Philippe walk the wire was a once in a lifetime gift. The film ends with the main characters discussing how both the event itself and the resulting fame caused the breakdown of friendships and relationships.

There are a couple of mild sexual references in this movie, including:

Man on Wire is a documentary containing real and re-enacted footage. It is an entertaining and artistic adventure suited to a wide audience.
The main message from this movie is that if you really want to achieve something, nothing is impossible.
Values in this movie that parents may wish to reinforce with their children include:

Parents may also wish to discuss with their children the real life dangers and consequences of Philippe’s actions, for example