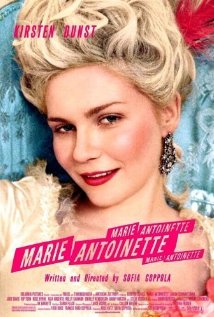 14-year-old Austrian-born Marie Antoinette (Kirsten Dunst) is betrothed to 15 year old Louis, heir to the French throne (Jason Schwartzmann). Marie’s mother (Marianne Faithfull) provides Marie with some insight into the differences between the Austrian and French courts but she is otherwise unprepared for what she is to find. Marie is taken by coach to the Austrian-French boarder and handed over to her chaperone, the Comtesse de Noailles (Judy Davis) to be transformed for her wedding. On the wedding night, the marriage is unconsummated as Louis appears oblivious to his role.

This continues for seven years as Marie is pressured to produce an heir. She becomes lonely, confused and distraught, beginning to indulge in a decadent life style involving gambling, drinking, infamous parties and frivolous spending. Before Marie is able to produce an heir, King Louis XV (Rip Torn) dies, elevating the dauphin and Marie to King and Queen of France. Marie’s brother arrives and explains the facts of life to Louis, after which Marie becomes pregnant and gives birth to a daughter.

Following the birth, Marie retreats to the countryside to raise her daughter in peace and tranquillity but soon returns to her more decadent life style and seeks a secret love affair with Count Fersen (Jamie Dorman). Sometime later, Marie gives birth to a second child, a boy and France gets a long awaited heir.

Marie becomes more and more unpopular with both the court and the masses. The Bastille is stormed by an angry mob; marking the beginning of the French revolution. Eventually the mob turns up at the palace and Marie, Louis and their children are taken to their awaited fates.

There is infrequent low level violence in this movie including:

In addition to the above-mentioned violence, the scene in which Marie and her sister in law are depicted giving birth could disturb children under five, although no graphic details are shown.

Children in this age group my also be disturbed by the above-mentioned scenes.

Apart from scenes already listed, children aged eight to thirteen are unlikely to be disturbed by scenes in this film.

It is unlikely that anything in this movie will scare or disturb children over the age of thirteen.

Marie Antoinette is a period drama inspired by Antonia Fraser’s biography of the same name that seems tailored to an adult audience. It is a rather melancholy film which leaves much left unsaid.

The main messages from this movie are; that greed, and isolation associated with aristocracy resulted in arrogance, ignorance and a lack of empathy and that being wealthy does not necessarily lead to happiness or fulfilment.

Values in this movie that parents may wish to reinforce with their children include that the important things in life are not necessarily money and possessions, but a family that loves and cares for you, a spouse who is a true partner and friends that support you through hard times.