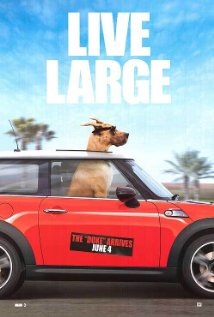 Marmaduke is based on the comic strip created by Brad Anderson, which featured in Australian newspapers and magazines in the 1970s – 1980s.  This partially animated comedy, directed by Tom Dey, revolves around the adventures of Marmaduke, the talking Great Dane (voiced by Owen Wilson).

The story opens with Marmaduke’s owner, Phil Winslow (Lee Pace) feeling dissatisfied with an apparently dead-end life in Kansas.  When an attractive job opportunity arises, he and his wife Debbie (Judy Greer) decide to pack up the family and move to California.  Once settled there, Marmaduke soon meets a host of new canine friends, including Maisie (Emma Stone), Guiseppe (Christopher Mintz-Plasse) and Raisin (Steve Coogan), and some enemies, such as Bosco the “alpha-dog” (Kiefer Sutherland) who is constantly surrounded by a gang of canine henchmen.

Meanwhile, Phil becomes so involved in achieving success in his new position with Bark Organics dog food company that he fails to realise how unhappy his children are becoming.  After a series of disastrous events, Marmaduke eventually helps Phil to acknowledge that he has been neglecting his family.

There is some physical and verbal violence in this movie including:

In addition to the above-mentioned violent scenes, there are some scenes in this movie that could scare or disturb children under the age of five. While watching this film, the reviewer heard young children in the audience crying during some of the violent and frightening scenes.

Younger children in this age group may also be disturbed by the violent and scary scenes described above.

Younger children in this age group may also be disturbed by the violent and scary scenes described above.

Some products were displayed or mentioned in this movie, including:

There are no explicit depictions of nudity or sexual activity in this movie but there are two very mild scenes where Phil and his wife Debbie share a brief kiss.

There is no direct substance use in this movie.  However, there are some implied references to substance use, including:

There is some coarse language in this movie and frequent threatening language, “put-downs” and verbal discrimination of those who are different in this movie, including:

In addition, there are several jokes about farts and animals urinating  For example, in one scene, as a practical joke, an unnamed dog sneaks up behind a man relaxing in the park and urinates in his plastic cup, which the man subsequently takes a drink from.

Marmaduke is a family comedy that makes use of some specialised animation effects in order to enable the animals to talk to each other, dance and behave like humans.  While not exactly sophisticated humour, several scenes are really quite funny.  The simple story line involving animals is certainly pitched at the pre-teens but the realistic animated violence and danger may frighten young children. The film’s key message - that all animals are valuable and should not be discriminated against - may well be lost on children under ten.