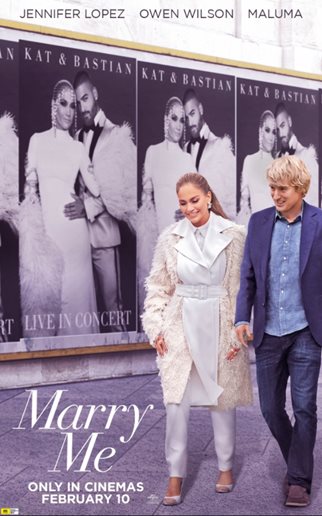 Music superstar, Kat Valdez (Jennifer Lopez), is about to marry Bastian (Maluma), the man of her dreams. It will be a wedding the likes of which the world has never seen. These two pop icons will end a music tour by performing their hit single, Marry Me, and will then tie the knot before an audience of 20 million viewers. Coolidge High math teacher, and single dad, Charlie (Owen Wilson), has never heard of Kat Valdez but in an effort to show his young daughter, Lou (Chloe Coleman), that he is actually fun, he agrees to them accompanying his lesbian colleague, Parker (Sarah Silverman), to the concert/wedding after she was dumped last minute by her girlfriend. Moments before going onstage to take her vows, Kat sees an online post showing Bastian cheating with her assistant. Utterly devastated, Kat addresses the audience and looks out to see Charlie holding a sign saying, ‘Marry Me’, that Parker had just inadvertently passed him. Deciding to be spontaneous and embrace the moment, Kat says she will marry the man with the sign instead of the man who just broke her heart. Completely stunned, yet encouraged by his daughter and the vast audience around him, Charlie goes ahead and marries Kat. No one can believe what has happened. Bastian leaves for Puerto Rico, determined to win her back; Kat’s managers hatch a plan to make things work while the media frenzy dies down; and Charlie wants his simple, media-free life back and is worried how all the attention will impact Lou. But, despite all the obstacles they face and the fact that their worlds could not be any more different, that magical moment where they both took a leap of faith may turn out to be the best decision either of them has ever made.

Marry Me is a romantic comedy that makes you root for the underdog and reminds you that, for some, not everything always adds up the way you initially think it will. While the plot may be somewhat predictable, it features a wonderful cast and some excellent new songs. The film will be most enjoyed by mature or older teen and largely female audiences.