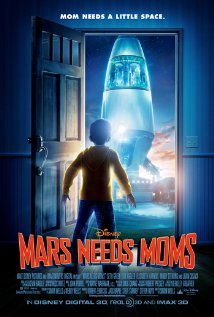 Not recommended under 7, PG to 10 (Violence; Disturbing scenes)

After disobeying his mother (voiced by Joan Cusack), nine-year-old Milo (voice of Seth Dusky, performance capture by Seth Green) is forbidden to watch his favourite TV program and is sent to bed, telling his mother, “My life would be so much better if I didn’t have a mom.” Milo later goes to his mother’s room to apologise, but discovers Martians in the process of abducting her. Milo chases the Martians and through a comedy of errors ends up as a stowaway aboard the Martian spaceship.

When the ship reaches Mars, Milo finds that the planet is ruled by female Martians, who quickly discover Milo and place him in a prison cell. With the assistance of an unseen source, Milo escapes via a garbage chute that leads him to a giant Martian rubbish dump. Milo finds the rubbish dump populated by hundreds of Martian males and one human male.  Gribble (Dan Fogler) is a techno genius who has been a castaway on Mars since he, like Milo, came as a boy. Through Gribble, Milo learns that every 25 years a batch of Martian babies are born. The males are discarded while the females are raised by nanny-bots. These robots are programmed with the memories of a single human mother, which is why the Martians needed Milo’s Mom. When Milo learns that the memory extraction process will kill his mother, he enlists Gribble’s help to devise a rescue plan.

Loss of a parent; aliens

Mars needs Moms contains scenes of family argument, action violence and peril that are at times intense. Examples include:

Mars Needs Moms is a 3D animated science fiction adventure targeting  primary school aged children, but also likely to entertain older viewers. The film’s animation is based upon motion-capture technology that gives the film a more realistic appearance and may have a greater impact on younger children in terms of scary images or disturbing scenes. Some of these scenes make it unsuitable for children under seven.

The main message from this movie is that, despite having to set guidelines, enforce rules and hand out punishments, parents love their children unconditionally.

Parents may also wish discuss with their children the reasons why rules and boundaries need to be set, and how they provide children with a sense of security and a safer environment.