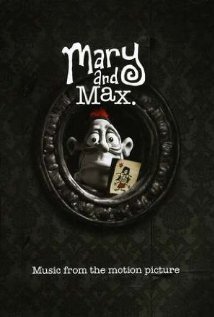 Not suitable under 13; parental guidance recommended to 15 (themes, sexual references and substance abuse)

The year is 1976, and Mary Daisy Dinkle (voice of Bethany Whitmore) is an unloved eight-year-old girl, who lives in the Melbourne suburb of Mount Waverly. Mary, who wears thick glasses, has eyes the “colour of muddy puddles” and has a birthmark “the colour of poo” on her forehead, is constantly bullied at school and her only friend is a pet rooster named Ethel. Mary’s mother is an alcoholic chain-smoking shoplifter, and her father works in a factory attaching strings to teabags. His hobby is taxidermy and he pays Mary no attention at all.
Mary is a little confused about where babies come from and one day while in a post office, rips a page from an American phone book, picks a name at random and writes to that person asking them where babies come from. The name Mary picks is Max Jerry Horowitz (voice of Phillip Seymour Hoffman), an overweight forty four-year-old Jewish man, who lives in New York and suffers from Asperger’s syndrome. Max lives a very ordered life. He suffers from severe panic attacks when confronted by anything new, doesn’t understand verbal signals, has an imaginary friend named Mr. Ravioli, keeps a pet fish, has a fondness for chocolate and regularly sees his psychologist.
Mary includes a chocolate bar with her letter and Max writes back, telling Mary much of his life’s history, although his understanding of where babies comes from is just as confused as hers. As the years pass, their letter writing continues and their friendship grows.
When Mary is a young woman (voice of Toni Collette) her father dies and leaves her some money which she uses to go to university to study diseases of the mind. She marries the Greek boy next door, Damian Popodopolous (Eric Bana). Mary wants to cure the world of mental illness and writes a book about Max and the unintended consequences of this book have a major affect on Mary’s life

There is some low-level violence, slapstick violence and bullying in this movie including:

The above mentioned violent scenes in this movie that could scare or disturb children in this age group.

Children in this age group may also be disturbed by some of the themes and scenes in this film, including bullying, mental illness and suicide

The film contains a number of sexual references throughout.

No coarse language of concern, but putdowns including “poo face” and “wog”

Mary and Max, based on a true story, is a dark animated adult comedy about childhood, relationships, and social and mental health issues. The greater part of the story is presented through narration (voice of Barry Humphries).
The film is deeply moving, with the darkness of the comedy at times making it shocking rather than humorous. The serious themes make it a film for adults and older adolescents. The main messages from this movie are:

This movie could also give parents the opportunity to discuss with older children attitudes and behaviours, and their real-life consequences, such as