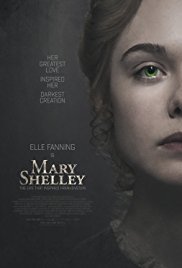 Not recommended under 13, parental guidance recommended 13 to 15 due to themes, sexual references, some frightening imagery and lack of interest

Mary Shelley is a biopic of the romance between Mary Wollstonecraft Godwin (Elle Fanning), the author of Frankenstein, and the poet Percy Shelley (Douglas Booth).  When 16-year old Mary falls in love with Percy Shelley and elopes in secret with her half-sister Claire (Bel Powley) in tow, her family is dismayed and she is forced to live in scandal.  Following a series of trials, including the loss of Mary’s newborn, the three spend a summer with fellow poet Lord Byron (Tom Sturridge) in Geneva.  There, Byron challenges them to write a ghost story, which inspires Mary to conceive her famed novel.

There is some coarse language, including "whore-monger".

Mary Shelley is a relatively conventional period romance, perhaps surprising for a biopic about the prolific and unconventional reformist author.  While clunky at times in dialogue and story, the film is likely to be enjoyed by adults and older teenagers but should be considered with caution for younger viewers, who may find it frightening, uninteresting, and sexually explicit. The film is not recommended for children under 13 and parental guidance is recommended for younger teens.