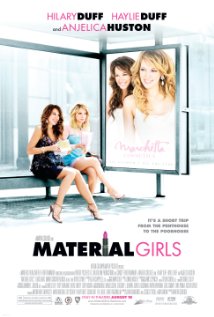 Ava and Tanzie Marchetta (Haylie and Hilary Duff) are the faces and heiresses to the multi-million Marchetta cosmetics company and appear to lead superficial and materialistic lifestyles. Ava is about to announce her engagement to a rising soapie star, while Tanzie is secretly submitting applications to study biochemistry at university.

Unfortunately, the company their late father started appears to be struggling financially an they are advised by their guardian and company CEO, Tommy (Brent Spiner) to consider a huge takeover offer from rival company owner, Fabiella (Angelica Huston). Before they can accept, a scandal breaks out regarding the Marchetta products, causing stock prices to plummet. Within twenty-four hours, the girls accidentally burn their house down, have their car stolen ,have their credit cards cancelled, and Ava’s engagement is at an end.

Ava and Tanzie cannot believe their father would knowingly sell harmful products and despite significant pressure to sell their now nearly worthless company, they set about trying to clear their father’s reputation.

One instance, in which Jayden, an assistant at Marchetta, hits Tommy in the face with a folder. He appears to experience pain following this, but the scene is depicted in a comic manner.

There are some scenes in this movie that could disturb children under the age of five, including:

It is unlikely that anything in this movie would scare or disturb children in this age group.

Dominos Pizza are displayed or used in this movie

Material Girls is a lightweight teen comedy and the target audience may enjoy the attractive main characters, their array of beautiful clothes, their glamorous lifestyles, and gentle romances. Older audiences may find the storyline and characters somewhat shallow and clichéd, and the comedic attempts weak.

The main messages from this movie are that money can’t buy you happiness, and the importance of family and true friends.

This movie could also give parents the opportunity to discuss with their children the importance of treating all people respectfully, and finding meaning in life apart from a materialistic lifestyle.