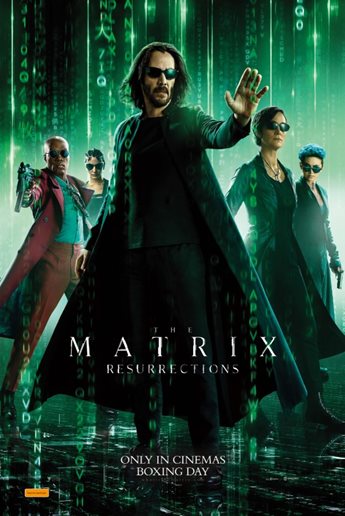 The audience finds Thomas Anderson (Keanu Reeves) – who had once swallowed a Red Pill on his search for the truth and, as ‘Neo’, was at the centre of humankind fighting against the enslavement of the Machines – trapped back in oblivion. Anderson is now a successful Computer Game Designer, and Developer of a game trilogy called, “The Matrix”, and he seems to have forgotten his past as Neo. He is, however, haunted by dreams, hallucinations, psychotic episodes, and suicidal ideation. He tries to stay ‘sane’ with the help of a therapist (Neil Patrick Harris), who prescribes him Blue Pills. When one day Anderson encounters a mysterious woman called Bugs (Jessica Henwick) and her associate, Morpheus (Yahya Abdul-Mateen II), it dawns on him that his ‘crazy’ thoughts and delusions are in fact memories. Anderson decides to take yet another leap of faith, finding himself extracted from his pod, and back in the ‘real’ world. Here, once again as ‘Neo’, he learns that, in fact, 60 years have passed since his closest companion, Trinity (Carrie-Anne Moss), was killed in the Machine Wars, and he was fatally injured. In the meantime, free humans have built a new bastion; a new version of The Matrix is in place; and humankind is being exploited and harvested for their energy to a more devastating degree than ever. Neo’s goal is clear: free Trinity – who, like him, had been restored and enslaved once more – and set things straight within The Matrix.

There is frequent action violence in this movie, including:

The Matrix Resurrections is the long-awaited fourth instalment of The Matrix series, following 1999’s ground-breaking film, The Matrix, and subsequent 2003’s, The Matrix Reloaded and The Matrix Revolutions. While the movie could potentially be watched as a stand-alone, due to recurring characters, frequent references, flashbacks, and re-used archive footage from its predecessors, it is recommended to watch at least the first movie in order to understand the post-apocalyptic world as a setting, as well as main character’s histories and relationships. The two main original characters and cast have returned – Keanu Reeves as Neo, and Carrie-Anne Moss as Trinity. Other iconic characters such as Agent Smith (Hugo Weaving) and the original Morpheus (Laurence Fishburne) appear in recycled archive footage and as 3-D holograms. The original cast is joined by Yahya Abdul-Mateen II and Jonathan Groff as alternate versions of Morpheus and Agent Smith, respectively, as well as Jessica Henwick and Jada Pinkett Smith as underground fighters. As in the original trilogy, there are frequent action fight scenes, filmed in famous bullet time. There is also a fair amount of tongue-in-cheek humour. The amount of violence, the overarching sci-fi doom and gloom setting, and prominent themes of peril and threat make this movie unsuitable for viewers under the age of 15, and parental guidance is recommended for young people aged 15 and possibly beyond.

The main messages from this movie are things are not always what they seem; and that sometimes you have to take a leap of faith and fight for what (or who) is really important to you.

This movie could also give parents the opportunity to discuss with their children the importance of believing in change and progress; and not to judge everything/everyone in black or white categories: some humans and machines/programs have managed to negotiate and cooperate. For example, 60 years on, the new freedom fighters have some machines that live and work with them - almost like pets. Also, there is negotiation between Neo and Trinity with Agent Smith and the Analyst, discussing terms of the Matrix.