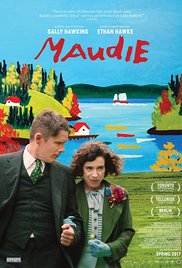 Not recommended under 14 due to lack of interest for young children, sexual references, and disturbing scenes and themes

Maud Dowley (Sally Hawkins) suffers from crippling arthritis and due to a birth defect has always struggled to walk normally. She is often told by her aunt Ida (Gabrielle Rose) and brother Charles (Zachary Bennett) that she is incapable of looking after herself and society seems to consistently send the message that she will never amount to much. Maud, however, has a strong spirit, a determination to do what she loves and a deep desire to make her way in the world regardless of whether or not anyone else thinks she can. She believes in herself and in her own self-worth.

When Everett Lewis (Ethan Hawke), a rough, loner and a local fisherman puts up an advertisement at the local grocery store requiring a live in maid, Maud applies for the job. When no one else applies Everett gives her the job but treats her terribly. Maud becomes ostracized by her family as everyone says she is living there as his love slave.

Attempting to bring a little happiness to her new life Maud begins to paint again. She starts with the windows and walls of the house and quickly moves onto cards and pieces of scrap from the wood pile. A chance encounter with Sandra (Kari Matchett), a customer of Everett’s who is visiting from New York, helps Maud to begin selling her paintings and leads to her becoming something of a local celebrity. Newspapers feature articles about Maud and her art, she and Everett appear on TV, and the President of the United States purchases some of her work.  Countless others  come to their quiet corner of Nova Scotia to see this famous artist and buy her paintings.

As time goes by Everett’s feelings soften towards Maud, they marry and a deep love and affection begins to grow between them. Ultimately they both find happiness with each other though it is not as long lived as either would have liked.

The themes of sexism and chauvinism run throughout the film. Maud, for the majority of her life is put down and made to feel inadequate and incapable, firstly because she walks with a limp and secondly because she is a woman. There are secondary themes running just below the surface of abandonment and separation. Everett who was raised at an orphanage has a fear of being left and pushes people away as a result. An illegitimate baby girl that Maud gave birth to years earlier was sold by her brother and aunt as soon as she was born while Maud was made to believe that the baby had died. This event haunts her.

There are a number of sexual references in the film, including:

There is no nudity in the film but Maud and Everett are seen in bed on a number of occasions and at one stage it appears that they are making love, although they also both appear to be fully clothed.

Maudie is a slow paced, possibly romantic, drama based on the real life story of Maud Lewis. It is not a feel-good movie: many scenes are both confronting and overwhelmingly sad at the same time. There is however a sense of hope that permeates the film as a whole and it is likely to appeal to more mature audiences who will appreciate the stellar performances given by both Hawkins and Hawke.

Because of lack of interest for young children, sexual references, and disturbing scenes and themes, the film is not recommended for children under 14 and it raises issues which parents of older teens may wish to discuss.

The main messages from this movie are to be true to yourself and that true happiness and beauty can be found anywhere.

Parents may wish to discuss why Maud stayed with a man who treated her so badly, and that although Everett eventually grew to love Maud, this is not always the case. Physical, psychological and verbal domestic violence are not acceptable and victims should be advised to seek help.