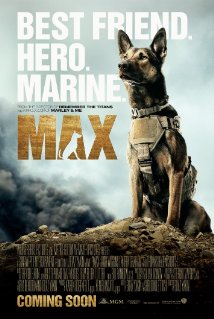 Not recommended under 10; parental guidance recommended 10-13 due to violence and disturbing scenes and themes

Max is an American adventure film that follows the story of Max, a military-trained Belgian Malinois dog. Max is intelligent, brave and handsome. He was chosen to assist US Marines in Afghanistan and his handler is Kyle Wincott (Robbie Amell). At one point, Kyle discovers that his friend and comrade Tyler (Luke Kleintank) has been illegally selling recovered weapons. After Kyle tells Tyler that he will not cover for him, Tyler allows Kyle to be killed in battle in an effort to protect his secrets from being discovered.

Without his handler, Max falls into a terrible psychological state. When Kyle’s family eventually takes him in, Max only responds well to Kyle’s brother Justin (Josh Wiggins). Justin himself is struggling to deal with Kyle’s death, and also the pressures of living up to his family’s standards.

When Tyler visits the Wincott family, he tries to convince everyone that Kyle’s death was the result of Max becoming violent and turning on Kyle. However, on an unrelated visit into the woods one night, Justin sees Tyler selling weapons to several cartel members. Max and Justin are overheard, and a fight breaks out. When Max and Justin escape, they begin a crusade to prove that Tyler is guilty and avenge Kyle’s death.

Children in this age group are also likely to be disturbed by the violent scenes and the death of Kyle. Max is injured near the end of the film and lies on the ground as if dead for a moment. This may distress young children, as may Max’s distress at Kyle’s funeral and the injury of another dog.

There is mild sexual activity and nudity, including:

There is mild use of coarse language, including:

Max is an inspiring story about triumphing over loss and a battle of good versus evil. The film follows US military dog Max as he recovers from the loss of his handler Kyle alongside Kyle’s brother Justin who is also struggling with grief after Kyle’s death. The movie emphasises the importance of support from loved ones in difficult times. It also strongly highlights issues of morality such as the question of doing illegal or immoral things for money, or trying to do the right thing. The film also explores the concept of honesty, and the importance of owning up to one’s mistakes.