Maya The Bee 3: The Golden Orb 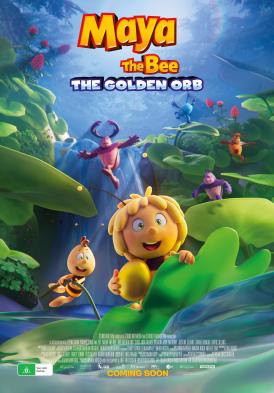 Maya (voice of Coco Jack Gillies) is off on another adventure and getting into a lot of trouble in this third Maya the Bee movie. Thrilled by the arrival of Spring, Maya takes her friend, Willy (Benson Jack Anthony), to explore the new growth and blossoms. They find themselves rescuing an ant struggling with some menacing beetles. The ant entrusts Maya and Willy with a very special golden orb and directs them to take it to the Bonsai Mountains.

Along the way, the friends team up with a comic duo, soldier ants, Arnie and Barnie (the Umbilical Brothers). They soon discover that the orb contains an ant princess, whom they name Smoosh. The beetles, led by the egotistical Romulus, are determined not to let the princess reach her destined home and set out to prevent Maya and Willy at all costs. Maya, however, is determined to overcome all obstacles and to reach their final goal.

There is also some comedic violence in this movie, mostly done for laughs, including pratfalls, and characters falling over and knocking into each other.

Maya The Bee 3: The Golden Orb is an animated movie about a little girl bee named Maya who is headstrong, brave and determined. It is a cute movie which shows that insects often vie over territory but concludes that it is better to live and work together in harmony. The movie is suitable for all ages, however, very young children might be concerned that Maya is often in peril, therefore parental guidance is recommended for children under 5.

The main messages from this movie are bravery and courage and to find ways to resolve conflict, other than fighting.