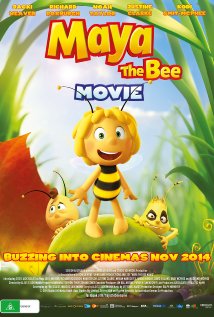 Maya the Bee (voiced by Coco Jack Gillies) is an adventurous and fun-loving little bee who doesn’t want to follow the rules of her hive. When Maya is banished from the hive, she and her best friend Willy (Kodi Smit-McPhee) must learn to survive outside the hive in the meadow. With help from a friendly grass-hopper named Flip (Richard Roxburgh), Maya and Willy learn that the other bugs are actually friendly and not to be feared.

Back at the hive, the Queen Bee’s (Miriam Margolyes) royal jelly is stolen and the hive blames the hornets, who are the bees’ worst enemies. It is up to Maya and her new found friends to save the queen and prevent the bees and the hornets from having a nasty battle.

Death of the Queen Bee; separation from a parent; soldiers and battles; crime

Some of the younger children in this group may be scared by some of the above-mentioned scenes.

Based on a television series, Maya the Bee Movie is an enjoyable film about learning to be yourself, standing up for your friends and accepting others for who they are. The film is ideal for 5-10 year old children. While there are some witty puns that might make the adults laugh, older children will probably find this movie a bit boring. There are some scary scenes, so parental guidance is recommended for children under 6 years old.