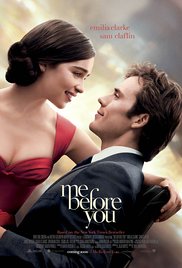 Not recommended under 14 due to themes, sexual references and coarse langage

Me before you is romantic film, based on a novel, about an unfolding relationship between two unlikely companions. Will Traynor (Sam Claflin), once a high-powered financier who was rising quickly in his career, has been left paralysed from the neck-down after being involved in a motorcycle collision. Will requires a carer and decides to take a chance on a young and optimistic former waitress named Louisa (Emilia Clarke) despite her lack of experience.

While Will initially treats Louisa quite rudely, the two soon grow closer and develop intimate feelings for one another. After some time, Louisa discovers that Will intends to travel to Switzerland to be euthanised as a result of his disability and continuous pain. Heartbroken by Will's decision, Louisa sets out to change his mind and attempts to convince him that life is indeed worth living.

Living with a disability; suicide; euthanasia; love and relationships

Will is paralysed, and frequently experiences pain as a result of his condition.

The film presents the issue of euthanasia, and the decision of a disabled person to end his life.

Children in this age group may also be disturbed by the themes of disability, suicide and euthanasia.

Younger viewers in this age group may also be disturbed by the themes of disability, suicide and euthanasia.

There is coarse language in the film, including:

Me before you is a sad film that touches on some serious themes, which make it more suited to older teens and adults. There are also some sexual references and coarse language. It is therefore not recommended for viewers under 14 and there is plenty to discuss with older teens.

With the two lead characters presenting opposing viewpoints in regard to the worthwhile nature of living life with a disability, the movie aims to highlight the complex issue of euthanasia. Some viewers may be concerned that the film depicts disability in a negative light, but Louisa’s struggle to show Will that his life is worth living illustrates the human capacity for optimism and hope within otherwise tragic situations. The film also highlights the importance of close relationships and the significance of having compassionate and supportive people around during difficult times.