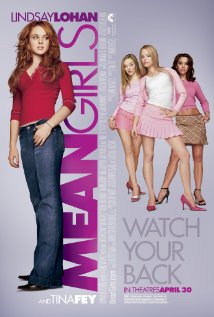 Cady Heron has led an exciting but sheltered life, being brought up and home schooled by her research scientist parents in Africa. That all changes however when at the age of 16, the family move back to America and Cady goes to a public high school. She gets a major culture shock when she finds the school segregated into various groups such as the Asian Nerds, the Cool Asians, the Sexually Active Bambies and, high in the pecking order, the Plastics. This is a group of three girls, Regina, the queen bee and her workers Gretchen and Karen who are all in love with themselves.

The first person to befriend Cady is gothic Janis, reputed to be a lesbian, who lets Cady in on the social hierarchy at the school. Janis used to be best friends with Regina in Middle School but they fell out and are now enemies. When Regina decides to invite Cady into the Plastics which is such an honour, Janis sees this as a way to sabotage the group. Together with friend Damien, who’s gay, Janis and Cady devise ways to bring down the Plastics.

Unfortunately things start to go awry when Cady, having infiltrated the group, becomes as ‘plastic’ as the others. Things start to get complicated when Cady starts to like Aaron, an ex-boyfriend of Regina’s and Regina can’t let that happen. However things take a definite turn for the worse when Regina gives her poison pen diary to the Principal and accuses Cady of writing it.

There are a lot of sexual references:

There is no nudity but the teacher takes her top off when Cady spills her coffee over her and she accidentally removes her t-shirt with her jumper leaving her in just a bra.

Sexual activity is restricted to heavy kissing, including kissing by two girls.

There are some references to alcohol and other drugs in this movie:

There is frequent use of the words bitch, slut, and whore.

The take home message from the movie is that young people shouldn’t be afraid to be themselves.