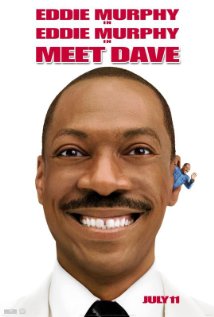 Not recommended under 8, PG to 13 (Violence, Crude humour).

The Captain (Eddie Murphy) and his crew including Second in Command (Ed Helms) and Number 3 (Gabrielle Union) crash their spaceship, which is in the form of a human called Dave (also played by Eddie Murphy) on Liberty Island. The group of tiny intergalactic travellers have come to earth to collect all the salt from the world’s oceans. The salt will provide their people with power for generations to come. The only problem, aside from the fact that what they plan to do would destroy all life on earth, is that the spherical device which they need to collect the salt has crashed separately from the ship.
In fact the sphere crashed right through Josh’s bedroom window. Josh (Austyn Myers) is an 11 year-old boy who is small for his age but wants to be a hero like his dad was before he died. Josh lives with his overprotective mother Gina (Elizabeth Banks) who crashes her car into Dave and then does everything she can to make amends.

Meanwhile Dave is running out of power and time. The crew must find the sphere, drain the oceans and get back to their planet, or all will be lost. The sphere is taken from Josh by school bullies and must be tracked down. With help from Josh and his mom Dave’s crew learns all about the complexity and value of human life and take on board far more than they bargained for.

There are no additional scenes in this movie that are likely scare or disturb children aged eight to thirteen.

There is some name calling and crude language. Including

Meet Dave is a science fiction comedy featuring unusual special effects and a slightly off-beat plot. The film is most likely to be enjoyed by die-hard Eddie Murphy fans and anyone who appreciates crude humour.
The main messages from this movie are that strength and courage come in many different sizes and that what may appear to be useless or inferior at first may prove to be of inestimable value upon closer inspection.
Values in this movie that parents may wish to reinforce with their children include: