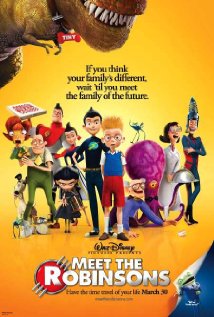 Not recommended under 8, PG to 10 (Violence, Scary scenes)

Abandoned as a baby, Lewis (voice of Daniel Hansen) is left on the doorstep of an orphanage where he will spend the next twelve years searching for a family who wants him. Much to the displeasure of his roommate Goob (Matthew Josten), Lewis is an avid inventor who is determined to find a way to remember his birth mother. He invents a machine that can replay memories of any point in time. On the verge of unveiling his invention at a science fair Lewis is sabotaged by the Bowler Hat Man (Stephan J. Anderson) who has come back from the future in an attempt to steal Lewis’ invention, pass it off as his own and destroy Lewis’ future in the process.
Wilbur Robinson (Wesley Singerman) a thirteen year old who is also from the future has come back in time to thwart the Bowler Hat Man’s evil plan, as his own existence is dependent upon Lewis’ survival. The boys travel to the future where Lewis meets the eccentric Robinson family who, despite their unusual ways, show Lewis what it means to truly belong.
In a desperate effort to save Wilbur and the future of society Lewis must believe in himself to achieve the impossible. By making a difficult choice between the past and the future Lewis comes to realize that the family he has always sought has been with him all along.

Children in this age group are unlikely to be frightened by anything in this film.

This animated adventure featuring excellent computer animated graphics and special effects will appeal to a wide variety of ages, but due to its content is best suited to slightly older children and adults.

The main messages from this movie are to never give up and always have hope for the future.

Values in this movie that parents may wish to reinforce with their children include persistence, determination, honesty and creativity.

Parents could discuss with their children attitudes and behaviours, and their real-life consequences, such as allowing anger to cloud judgement or the consequences of choosing to lay blame instead of taking responsibility for your own actions.