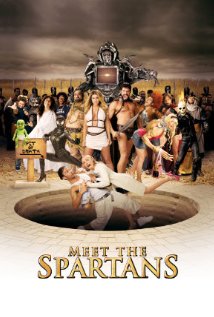 Not recommended under 15 due to adult themes, violence, sexual references and coarse language.

Meet the Spartans is a parody of the recent film 300, where 300 Spartan warriors fend off an army of invading Persians. It also parodies other films, film characters and a number of tabloid celebrities.

After a testing time as a child and having to prove his manhood, Leonidas (Sean Maguire) becomes King of Sparta. He marries Queen Margo (Carmen Electra) and the couple have a son. One day a Persian Emissary (Method Man) arrives and orders King Leonidas to bow-down before the God King Xerxes (Ken Davitian) or Sparta will be destroyed. King Leonidas kicks the Emissary, and several other people into the “Pit of Death”, and then manages to gather together a force of a mere thirteen “warriors” to march against the invading Persians. King Leonidas, his captain, Captain (Kevin Sorbo) and the thirteen warriors hold hands and skip off to war while gaily singing “I will survive.”

King Leonidas and his force go to “Hot Gates”, a narrow pass, where Leonidas plans to hold off the entire Persian army. When Xerxes’ army arrives it consists of about twenty men and women, including Hollywood characters and celebrities, and a blue screen showing thousands of celluloid warriors. Battles between the Spartans and the Persians include dance offs, a “badmouth-your-mother” session, an attack by the Ghost Rider, and a challenge from Rocky Balboa.

Meet the Spartans contains stylised “comic” violence that parodied the brutal violence and violent scenes depicted in the film 300.  Examples include:

In addition to the above-mentioned violent scenes, there are some scenes and images in this movie that could scare or disturb children under the age of five, including the following:

Meet the Spartans contains overt and covert sexual references and innuendo throughout. Examples include:

Meet the Spartans contains sexual activity through out and some nudity including:

Meet the Spartans is a spoof of the film 300. It also parodies a number of other films, film characters and tabloid celebrities. Much of the humour is crude and the film contains no messages of value.

Parents who allow their children to see this film may wish to discuss: