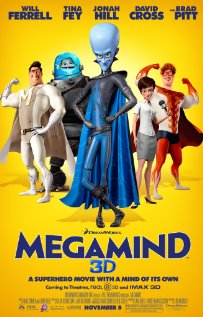 Not suitable under 7; parental guidance to 10 (Violent and disturbing scenes, lack of interest for younger children)

Megamind (voice of Will Ferrell) arrived on earth as a baby in a capsule at exactly the same time as Goody Two Shoes (Brad Pitt), both endowed with super powers. While Goody Two Shoes has a privileged upbringing, Megamind is brought up by convicts. He discovers that the only thing he is any good at is being bad, becomes a super villain and ends up in prison. His adversary Goody Two Shoes grows up to become Metro Man, the super hero of MetroCity.

Megamind is finally released from gaol on the day that Metro City has organised to dedicate a museum to Metro Man. Megamind, assisted by his fish companion, Minion (David Cross), manages to disrupt the celebrations by kidnapping popular television reporter Roxanne Ritchie (Tina Fey). When Metro Man comes to her rescue, Megamind succeeds in killing him, much to his surprise.

Megamind finds life rather boring without a good influence to oppose his badness. He therefore decides to create another super hero, Titan (Jonah Hill) who unfortunately decides he would rather be bad. Megamind now has a dilemma. He has to decide whether to oppose Titan by becoming a hero or to remain a super villain.

There are no additional scenes likely to disturb this age group.

Megamind 3D is an animated superhero comedy. There are some very funny lines in this movie but younger children are unlikely to understand the humour or the philosophical elements. It is aimed at older children, adolescents and adults.

The main messages from this movie are that good cannot exist without evil and vice versa and that sometimes people are bad because of their circumstances.