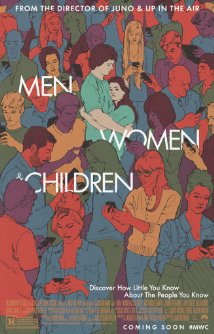 Not suitable under 15 due to themes, sexual references and scenes including pornography, and coarse language.

Men, women and children is a family drama that follows the lives of a group of high school teenagers and their parents as they attempt to deal with the difficulties that life and relationships bring about. At the crux of each storyline is an exploration of the important impact that technology has had upon communication, feelings of self-worth and major life decisions. In the process, the film examines issues such as bullying, celebrity, internet pornography, addiction and eating disorders among the younger characters, as well as infidelity, the use of sex workers and marital disillusion in regard to the adults.

The impact of technology on lives and relationships; pornography; parental responsibility, infidelity and divorce

Children in this age group may be disturbed by some of the violence described above as well as a scene where a girl having a miscarriage is seen with blood running down her legs.

Children in this age group may be disturbed by some of the violence described above and the scene where a girl having a miscarriage is seen with blood running down her legs.

Children in this age group may be disturbed by the following scenes:

Children in this age group may also disturbed by the above-mentioned scenes.

There are many sexual references in the film, including:

There is considerable sexual activity and nudity in the film, including:

The film contains some substance use, including:

Men, women and children is a film that demonstrates the complexity of human relationships and interactions, and the flawed nature of humanity, irrespective of age. It highlights the fact that contemporary society is filled with individuals of different generations who are overly-reliant upon technology.

The film demonstrates how technology may be a medium used to form positive relationships but that it may also be used for bullying or to access highly inappropriate content such as graphic pornography. Each of the characters makes mistakes and the other people in their life are strongly affected by their decisions – however, they all have decent intentions at the core of their behaviours. The film’s themes, sexual references and scenes which include pornography, and coarse language make it unsuitable for children under 15, but it raises some useful issues that parents are advised to discuss with older teenagers.

Issues that parents may wish to discuss include: