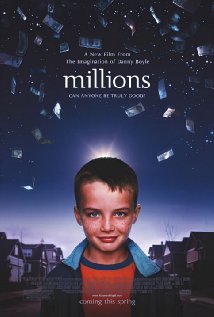 Nine-year-old Anthony (Lewis McGibbon) and seven-year-old Damian (Alex Etel) have just moved house with their father (James Nesbitt) in an attempt to start again following the death of their mother. Practical, level-headed Anthony is determined to make the best of the situation and just get on with his life, while Damian, a dreamer, uses imagination, fantasy and escapism to deal with his difficult world.

Just days before the Euro is to take effect and the British Pound is to be rendered useless, a bag full of money falls from the sky and lands at Damian’s feet. Believing it is a sign or gift from God, Damian sets out to feed the hungry and help the poor. Anthony, on the other hand uses the money to try to buy everything from friends to property.
With time running out, lots of money left and a sinister looking robber right on their trail, the boys begin to realise that money isn’t everything and that sometimes it can be more trouble than it is worth.

There are a number of violent scenes in the film.

From the middle of the film till the end, Damian is relentlessly stalked by a train robber who wants his money. The following elements of this pursuit could scare younger viewers:

The other theme that could disturb some young children is the fact that the boys’ mother has just died:

Children in this age group may also be concerned by the above mentioned scenes.

Many children between the ages eight to thirteen may also be concerned by the above mentioned scenes.

While some of the above mentioned scenes may temporarily worry older children, most will be old enough to realise that it is just a movie, will be able to take it in context and will be relieved by the outcome of the movie.

The bag containing the money has a large Nike symbol on its side. While Nike is never mentioned, the bag is seen frequently throughout the film.

There is one sexual reference. A boy from school is seen in the hallway offering a girl increasing amounts of money for some sort of ‘favour’. He tells her not to worry because he “has a good body” and then takes off his shirt.

There is one instance of sexual activity and a couple of instances of nudity:

There are a few instances of substances use in the movie, including:

The film contains a small amount of mild course language, including:

There are two main messages in the movie. Firstly, that sometimes money makes it harder to see what is really important and secondly that it is faith that makes you stronger. Parents may wish to discuss with older children that there are some things of value that money cannot buy.