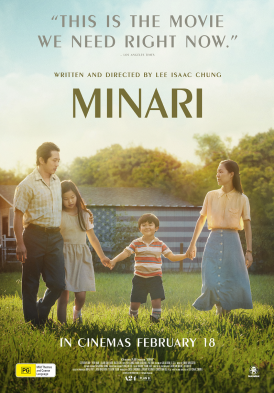 Set in the 1980s, Minari is the story of a young South Korean immigrant family (the Yi family) who have relocated from California, where they belonged to a large Korean community, to the rural backwaters of Arkansas. The ambitious father, Jacob (Steven Yeun), has plans to create a market garden, growing Korean vegetables to sell to the Korean communities. His wife, Monica (Han Ye-ri), is sceptical of his dreams and horrified to find herself living in a trailer home in the middle of nowhere. They have two children, David (Alan Kim) and Anne (Noel Kate Cho). David has a heart condition which means that he needs to be careful not to overexert himself. Monica is concerned that something might happen to David if he is left all alone whilst she and their father are working all day and arranges for her mother to come out from Korea to live with them and care for the boy. Although David is at first not impressed with his Grandmother (according to him she just does not behave like a normal grandmother – she doesn’t bake cookies, she swears too much and she wears men’s underwear), they slowly develop a beautiful and respectful relationship. When things take a quick turn for the worst, the family must struggle to overcome the tension between them and find the reasons that hold them together.

There are some racist comments, coarse language and mild toilet humour in this movie, including:

Minari is a beautiful family drama that is tender, gentle and very moving. It gives us a strong narrative of how families can stick together through adversity. Although Minari portrays a Korean family in America, the story will be universally recognisable to immigrant communities in any country and from any culture; speaking of our human desire to belong and to prosper, but with longing for the familiarity and ease of a mother culture. Minari is mostly in Korean with English subtitles so it will be hard for younger children to follow along unless they are quite proficient readers (approximately grade 4 or 5). In addition, the themes explored are more suited to adult or older teen audiences.

The main messages from this movie are that families can stick together in times of adversity and they will pull through to the other side; and that sometimes we must work hand in hand with nature rather than trying to bend it to our will.