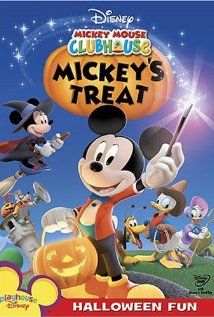 Recommended for children under 8 (Lacks interest for older children)

Viewers are invited to Minnie Mouse's Masquerade ball together with all Minnie’s friends. Donald Duck, Pluto and Goofy arrive, only to discover that Goofy has lost a shoe. Pete appears in numerous outfits trying to have the best costume, despite the fact that everyone wins a prize. Minnie is dressing as a princess and Mickey as a prince, so they go about making their royal crowns. After they find Goofy’s shoe and finish the decorations the ball begins and everybody dances. During the movie the audience are asked to count, sort, and identify shapes with the characters.

Minnie’s Masquerade is the first story from the Mickey Mouse Clubhouse: Minnie’s Masquerade DVD. It is a story about having fun with friends, and helping your friends out when they have a problem. Everybody at the ball gets a prize for coming dressed in costume, they are all different yet are rewarded the same. There is audience involvement with opportunities for counting, identifying shapes and sorting.