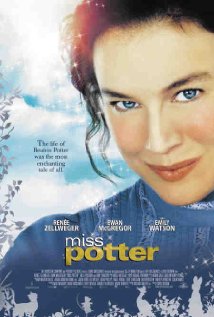 Lacks interest for children under 8, PG over 8 (Themes)

Miss Potter is the story of Beatrix Potter’s rise to fame through her creative little tales of the animals she sees as her friends, including Peter Rabbit and Jemima Puddle-duck.

At a time when women of 32 are expected to be married, Beatrix Potter (Renee Zellwegger) is a single woman with a career ambition.  This ambition is challenged by many hurdles as her pictures and stories are deemed silly and childish by her family and the town’s publishers.  She is given her first break by a new publisher Norman Warne (Ewan McGregor) whose abilities are also being challenged.  Warne falls in love with Potter’s little tales and together they successfully publish the books that have become the most well known children’s stories throughout the world.

As Beatrix’s animal friends come to life in popular children’s books, love between Beatrix and Norman also grows.  However their love is overshadowed by parental disapproval and Beatrix seeks solace and encouragement in her new friend Millie, Norman’s sister (Emily Watson).  The love story is marred by tragedy but Beatrix finds happiness in the beauty of the Lake District where she settles.

Death of a loved one, the position of women in society

There is no violence in this movie

Older children in this age group may require explanation of scenes involving Beatrix’s separation from, and grief at the death of, her fiance Norman.

Some children may require explanation of scenes involving Beatrix’s separation from, and grief at the death of, her fiance Norman.

Miss Potter is a captivating portrayal of the life story of Beatrix Potter which features enchanting animation and scenery. It is a story that will appeal particularly to adults and older children who have loved, and grown up on the Beatrix Potter stories.  Potter’s imagination, passion and determination make her a strong role model, particularly for adolescent girls, as the movie successfully demonstrates the constraints placed on women during this era.

This movie could also give parents the opportunity to discuss with their children the importance of environmental issues as Beatrix becomes involved in land preservation.