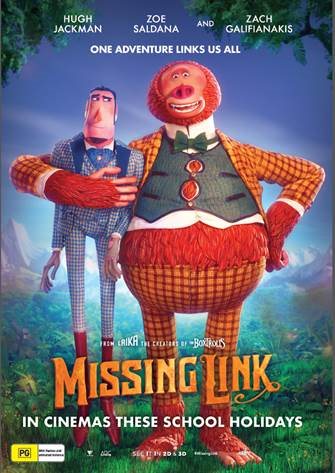 Not recommended under 8; Parental guidance 8-10 (Violence and scary scenes).

Set in the Victorian era, Sir Lionel Frost (voice of Hugh Jackman) is an eccentric explorer and searcher of all things strange and wonderful. He is also desperate for recognition and acceptance. He is however, excluded from a gentlemen’s club headed by the nasty Lord Piggot-Dunceby (Stephen Fry), and dismissed as a fool. Determined to prove them wrong, Frost sets out to find irrefutable proof of the mythical Sasquatch. He travels to North America where he meets a Sasquatch in person and names him Mr. Link (Zach Galifianakis). (Link later decides he doesn’t like this name and changes it to Susan).

Frost discovers that Link is very lonely and would dearly love to meet his cousins, the Yetis, who live in the Himalayas. Frost and Link set out on a long journey across America, where they are joined by fellow adventurer and ex-girlfriend, Adelina (Zoe Saldana). The trio travel the world to find the fabled city of Shangri-La, high up in the Himalayan Mountains. Unfortunately, things don’t turn out quite as planned, but Frost learns some lessons along the way, particularly that there are more important things in life than fame.

There is quite a lot of violence in this movie, including use of guns. Some violence is done for laughs such as:

Missing Link is an animated comedy with a lot of slapstick violence and quite a lot of unpleasant violence. It is also quite intense in parts. For these reasons it isn’t recommended for children under 8, but older children will probably enjoy it.

The main messages from this movie are that being a nice person is more important than being famous and that good triumphs over evil.