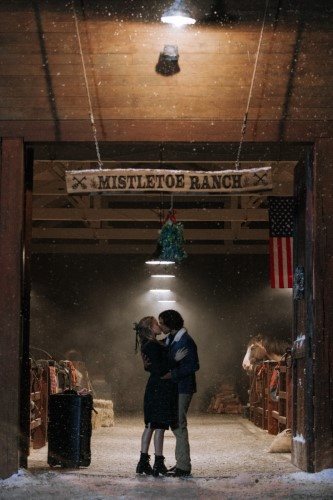 It has been 8 years since Aimée (Mercy Cornwall) left her home of Mistletoe Ranch, after her mother Molly died, to pursue her career in photography. Prior to leaving, Aimée had become engaged to James (Jordi Webber), a ranch hand and a friend she grew up with. Aimée’s busy life in New York meant that the two grew apart. However, when James decides to cancel the annual Christmas Party at Mistletoe Ranch, Aimée rushes back home to find out the reason for it.

When Aimée arrives back, she is dismayed to see that no-one has been living in the main family home, which has been kept in wraps. Aimée also gets to meet James’s daughter, Juniper (Molly Belle Wright). James and Juniper’s Mum have been separated for some time but remain friends. Aimée soon discovers that the ranch is in debt and she is faced with the prospect of having to sell it. She also discovers that she still has feelings for James, as he does for her. Aimée has to make a big decision about what direction her life is going to take.

In addition to the above-mentioned scenes and visual images, there are some scenes in this movie that could scare or disturb children aged five to eight, including the following:

Mistletoe Ranch is a romantic family drama with a simple story about the magic of Christmas and the re-kindling of a romance. There is no violence and very little scariness in the movie but parental guidance is recommended for under 8’s due to the nature of the film. It also probably wouldn’t hold much interest for younger viewers.

The main messages from this movie are that magic is something you make; and that there would be no surprises if life remained the same.