Mitchells, The vs. The Machines 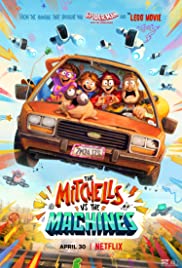 Katie Mitchell (voiced by Abbi Jacobson), an odd-ball student filmmaker, lives with her outdoorsy dad, Rick (voiced by Danny McBride); her wholesome but imperfect mum, Linda (voiced by Maya Rudolph); and her dinosaur-obsessed younger brother, Aaron (voiced by Mike Rianda). After being accepted into film school, Katie thinks she has finally gotten the chance to get away from the father who has never really understood her. But when Katie and her dad get into an argument, he decides to cancel her plane ticket to college and take the family on a cross-country road trip to Katie’s college and attempt to resolve their differences. As the trip progresses, Katie struggles to connect with her dad while staying connected online with her new film school friends. Meanwhile, Mark (voiced by Eric André), founder of global technology superpower, PAL Labs, abandons his original phone-based creation, PAL the virtual assistant (voiced by Olivia Colman), and announces a new addition to their ‘smart’ technology – robot assistants – using their artificial intelligence software. In retaliation for this betrayal, PAL the virtual assistant decides to hijack the robots, capture all humans, and rid the planet of humanity. As the rest of the human race is captured, the Mitchells somehow find they are the only humans left on the planet. With the help of two defective PAL robots ‘masquerading’ as humans, Eric (voiced by Beck Bennett) and Deborahbot 5000 (voiced by Fred Armisen), the Mitchells must battle robots, evil home appliances, and their own difficulty working together, to save humanity and their family.

The Mitchells vs. The Machines is an animated, family comedy from the creators of Spiderman: Into the Spiderverse and Cloudy with a Chance of Meatballs. With creative animation styles; use of both slapstick and verbal comedy; and moral messages of family cohesion and understanding, this film is likely to entertain both children and adults alike. However, due to scary scenes and visual images, this film is not suitable for children under 8 years old, and parental guidance is recommended to 12 years old due to science fiction themes of a robot apocalypse and family discord that may distress younger viewers.

The main messages from this movie are that understanding the experiences of others – especially those who are different to ourselves – allows us to be more compassionate and to get along better; and that listening to the ideas of others and appreciating their unique perspective of a situation can be a valuable tool when learning and problem solving.