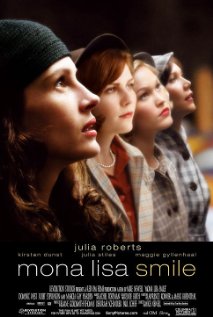 It is 1953 and Katherine Watson is an idealistic, liberated, graduate art history student who accepts a position at Wellesley College, an elite girls school. She hopes to make a difference to the girls’ lives but finds herself up against the establishment, a conservative school board of directors, mostly run by the girls’ parents. Katherine wants to teach the girls to be the future leaders in society but Wellesley College aims to teach the girls to be the wives of the future leaders. Some of the students also oppose her ideas and see Katherine as subversive, in particular Betty Warren who is determined to make life hard for her. Betty also makes life hard for Connie who has low self esteem and has trouble finding a relationship. Betty sees marriage as the best thing to happen to a girl and her greatest desire is to own a home with a washing machine. Betty’s marriage to Spencer is the social event of the year and she is intent on seeing her best friend Joan marry her boyfriend Tom so that they can be housewives together.

Katherine however has great plans for Joan who she sees as a potential law student and gives her an application form to apply for Yale. Joan does apply and is accepted into Yale but her (now) fiancé Tom explains to Katherine that he’s been accepted into Penn and therefore Joan obviously won’t be going to Yale as it will be too far for her to come home and cook his meals.

Giselle is a more liberated and promiscuous student who has an affair with the Italian teacher Bill Dunbar. Bill however is attracted to Katherine and they too have an affair. Katherine had previously been going out with another man, Paul, who she left behind when she went to Wellesely. Katherine has to make several decisions for her life, one being whether she wants to be married or not and whether she wants to stay on at Wellesley where she almost loses her job but is offered a re-appointment under very strict conditions.

There is no violence in this movie except for when Betty screams abuse at Giselle.

There are quite a lot of sexual references in this film including the following:

There is no nudity or sexual activity actually shown.

There is a lot of smoking in this movie and nearly all the girls and women smoke. One of the men smokes a pipe. There is a full page advert in a newspaper for Camel cigarettes.

There is some drinking at a bar and at a wedding.

There is a little coarse language including the following:

The message of this film is that girls should be free to make their own choices and not be dictated to by tradition and a male dominated values system.
The movie is set at a time when a woman’s “sole responsibility was to take care of her husband and children” and the thought of having a career was far removed. The movie addresses the sexual revolution that began to occur at this time and exposes the hypocrisy that it was acceptable for married men to have affairs. It doesn’t denigrate the right of a woman to choose to stay at home to care for her husband and children as this is Joan’s choice. Joan explains to Katherine that this doesn’t mean she has no depth or intellect but that it is her choice to do so.