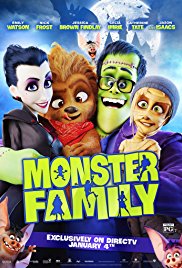 Not recommended under 7, parental guidance recommended 7 to 10, due to violence, themes and physical transformations that might scare young children

Emma Wishbone (Emily Watson) is down on her luck: her husband Frank (Nick Frost) is always working or sleeping, her daughter Fay (Jessica Brown Findlay) is struggling through the difficulties of adolescence, her son Max (Ethan Rouse) is getting bullied at school and her bookstore is in debt.  Emma can’t even walk down the street without encountering a series of unfortunate events.  She accidentally makes a call to Dracula (Jason Isaacs) who, in a matter of moments, falls in love with her and determines to make her his vampire bride. Dracula bribes an ancient witch Baba Yaga (Catherine Tate) to transform Emma but the witch accidentally transforms the whole Wishbone family into monsters.

The Wishbones set off to find Baba Yaga in the hope that she will transform them back, only to find themselves banished to the desert and more alone than they have ever been before. Here they must face their fears, find the strength that has been theirs all along, and learn to love and accept themselves if they are to save not only their family but also the world.

Dracula talks about Emma being “his” forever, despite the fact that she is already married.

Dracula feeds Emma pills which work almost instantaneously to curb her thirst for blood. He forces another pill down her throat that has the opposite effect as he hopes she will kill her family.

Monster Family is a predictable animated adventure about a dysfunctional family who are transformed into stereotyped horror movie monsters. It is aimed at young audiences but is not recommended for children under 7 due to violence, themes and physical transformations that might be scary for young children. Parental guidance is recommended for the 7 to 10 year old group.

The main messages from this movie are that the power of love is far stronger than that of evil, that each of us is braver than we think we are, and that beauty comes from within. We don’t need others to tell us that we are beautiful because it is about how we see ourselves, not how others perceive us.