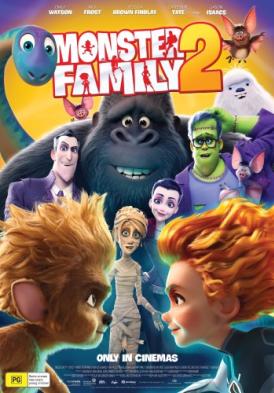 Not suitable under 8; parental guidance to 10 (animated violence, themes and scary scenes)

In order to stay in their human form, the Wishbones are supposed to be a happy family. But mum, Emma (voice of Emily Watson), and Dad, Frank (voice of Nick Frost), are far from perfect.; and Faye (voice of Jessica Brown Findlay) and Max (voice of Ethan Rouse) are far from happy. Their old friend, Baba Yaga (voice of Catherine Tate), is abducted from her own wedding by Mila (voice of Emily Carey), a young girl whose famous parents, Maddox (voice of Daniel Ben-Zenou) and Marlene Starr (voice of Emma Tate), have sent her out on missions to capture monsters from around the world and bring them back to their secret lab so that they can be of benefit for the greater good – or so they say. When the Wishbones’ attempts to save Baba Yaga fail, they find themselves transformed once again into a vampire, Frankenstein, a mummy and a werewolf. Together they set off to find Mila and try to stop her from abducting all the other ‘monsters’ as well. Meanwhile, after her interactions with the Wishbones, Mila begins to see that perhaps her family is not so perfect after all. With the help of Max, Mila finally finds the courage to confront her parents and learns that not only is she not their daughter but they have merely been using her and the creatures she captured to create a ‘perfect daughter’ whom they call ‘Mila 2.0’. Together, Mila and the Wishbones set about undoing all the damage the Starrs have done and together they learn that no family is perfect and that having imperfections is part of who they are.

Abduction; Deceitfulness; Bullying; The negative role social media can play in the lives of adolescents; The pressure to be perfect.

Monster Family 2 is an animated sequel to the first Monster Family film. While the main message about finding perfection inside yourself even when you are not perfect, is important, the plot and dialogue leave much to be desired. Due to the themes and a couple scary scenes this is not a film for younger children but rather one that families might watch together when the kids are older. It will be best enjoyed by fans of the first film.

The main messages from this movie are that nobody is perfect and that it is OK because our imperfections make us who we are.