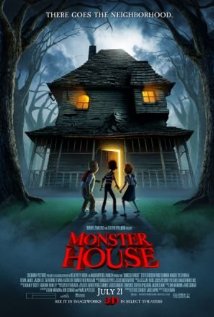 Not suitable under 8; parental guidance to 12 (scary scenes, violence, themes)

Mr Nebbercracker (voiced by Steve Buscemi) lives in a spooky old house in the middle of the street. Whenever a child walks, rides, throws a ball, in fact does anything on his lawn he comes out and yells and screams and is generally nasty to the child.

DJ (Mitchel Musso) lives across the road from this house and has been keeping a record of all the toys that Mr Nebbercracker takes. On this particular weekend his parents are away and he is being looked after by a babysitter Zee (Maggie Gyllenhhal). He and his friend Chowder (Sam Lerner) are playing basketball and Chowder loses the ball on Mr Nebbercracker’s lawn. When DJ plucks up the courage to get it, Mr Nebbercracker comes out and yells at him and picks him up. At this point Mr Nebbercracker collapses and DJ thinks he has killed the old man.

DJ then finds that The House seems to be trying to attack him. He calls Chowder who initially doesn’t believe him but ends up staying with DJ after experiencing the house’s aggression first hand. They work together to keep an eye on The House but are eventually distracted by a pretty girl called Jenny (Spencer Locke) who is selling sweets for her school. When she heads up the path to try and sell some sweets to The House, the boys go to save her. She also experiences an attack by The House so bands together with the boys to defeat The House and save the neighbourhood.

Children under the age of five will be very scared by most of the violent scenes listed above. Parents are reminded that young children are not reassured when ‘things work out okay in the end’, rather the visual images of the nasty old man and the scary house can stay with them. The humour is also not readily understood by young children. In addition to the violent scenes, there are some scenes in this movie that could scare or disturb children under the age of five, including the following:

Children in this age group will also likely be scared by the above-mentioned scenes.

Older children in this age group could be also be concerned that DJ’s parents are away, and that the babysitter is neither caring nor supportive but rather has a tendency to bully DJ.

There are no other scenes in this movie that are likely to upset children of this age, but some of the scenes described above are quite graphic and could be scary for some children at the younger end of this age group.

Children over the age of thirteen are likely to enjoy this movie.

The main message of Monster House is that it is best not to take things on face value but to find out the real reason behind someone’s actions. Values in this movie that parents may wish to reinforce with their children include:

This movie could also give parents the opportunity to discuss with their children how destructive it can to be hold onto negative emotions, and that in the end, it is not material things that matter but the relationships you have with others.