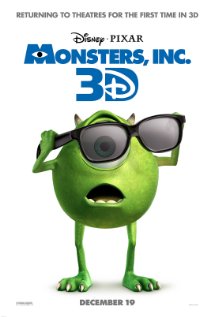 Monsters Inc. 3D is a re-release of the Disney/Pixar’s 2001 original animation. Mike (voice of Billy Crystal) and Sully (voice of John Goodman) are the dream team at Monsters Incorporated. They work together to scare as many sleeping children as they can so that the children’s screams can be stored and converted into energy for the city of Monstropolis.  Sully is about to reach the all time scaring record. However, times are tough for the monsters – children just don’t seem to be as scared anymore and Monstropolis is facing a power shortage.

One night, Sully discovers that a little girl called Boo (voice of Mary Gibbs) has been let into the monster world. Since children are believed to be toxic to monsters he fears the consequences and seeks Mike’s advice on what to do with the child. Avoiding the Child Detection Agency (CDA), the evil Randall (voice of Steve Buscemi) and Boo’s potentially toxic touch is challenging work for Sully and Mike. They battle through obstacles in an attempt to get ‘Boo’ back safely to her family and along the way, discover that laughter is much more intense than screams, making them rethink the way that they work!

Monsters Inc 3D contains some violence, made more intense by 3D effects, including:

In addition to the above-mentioned violent scenes, there are some scenes in this movie that could scare or disturb children under the age of five, including the idea that monsters wait in closets wanting to catch children’s screams. Examples of scary scenes whcich are made more scary by 3D effects, include:

Younger children in this age group may also be scared by some of the scenes described above.

There are some mild coarse language and putdowns in this movie, including:

This is an animated comedy with a new look at an old topic. Children have always wondered about monsters in their cupboards, but we see in Monsters Inc that the monsters are not as scary as wee thought! It is an entertaining family movie, although some scenes may be scary for under 6s, particularly in the 3D version.

Sully and Mike’s views on children are challenged when they meet Boo and try to get her back home. They learn they must fight off the evil Randall and his scary plans to obtain power in different ways and uncover ways to do so which are better for everyone! The main messages in this movie are:

Values that parents may wish to reinforce with their cildren include: