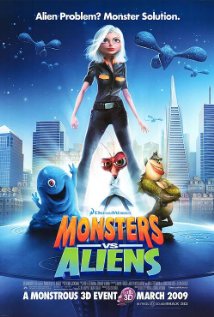 Not recommended under 5, Parental guidance to 13 (Violence, Scary scenes and themes)

In this animated adventure, bride-to-be Susan Murphy (voice of Reece Witherspoon), is struck by a falling meteorite containing “quantonium”; a substance that transforms her into a giant before she can be married to her fiancé Derek (voice of Paul Rudd).  Captured and locked away for being a monster, Susan befriends other monsters detained in a secret government compound. Among them are B.O.B. (voice of Seth Rogen), The Missing Link (voice of Will Arnett and Dr. Cockroach (voice of Hugh Laurie).
Elsewhere in the universe, Galaxar (Rainn Wilson), a tyrannical alien leader on the trail of quantonium, discovers a deposit on Earth and wants it for himself.  Conflict ensues between aliens and earthlings so the government decides to send the monsters in to destroy the aliens and save the planet once and for all.  Now Susan has to choose whether to lead the rag-tag group of misfits into glory or return to her former life when given the chance.

Monsters vs. Aliens is an animated action/science-fiction movie which is not suitable for very young children.
The main messages from this movie are