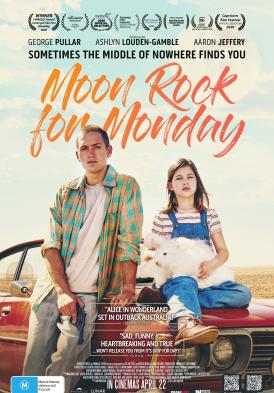 Not suitable under 12; parental guidance to 15 (themes, violence, drug use, scary scenes)

Pre-teen Monday (Ashlyn-Louden Gamble) suffers from a terminal illness that will likely take her life before she is 16. She takes medication that makes her feel sick and is home-schooled by her father Bob (Aaron Jeffery) but dreams of going to see the Moon Rock (Uluru) in the hopes that legends of its healing powers are true and that she will be well again. While chasing her pet rabbit onto a train, Monday meets Tyler (George Pullar) a troubled teen who has just robbed a jewellery store and accidentally killed a cop. Desperate to get out of town he decides to head to the Northern Territory and says that he will take Monday to see the Moon Rock on the way. As the two set off on their road trip, a nationwide man hunt is launched by a police force more intent on revenge than justice. While Monday and Tyler share adventures, overcome obstacles and form an unbreakable friendship, Bob follows his own leads and sets off across the country in search of his daughter.

Death of a pet; Death of parents; Separation from a parent; Missing a child; Living with terminal illness; Troubled teens; Police corruption; Doing the wrong thing for a good reason; The fear of being replaced.

Moon Rock for Monday is an on-the-run style drama with believable performances by the two lead characters. The starkness of the landscapes they encounter appears, in some ways, to be a reflection of the emotional turbulence of their lives and yet hope is woven throughout. Due to the overall themes and content this film is best suited to mature audiences.

The main messages from this movie are to live in the present moment and to go after your dreams no matter what they are or where they may lead you.