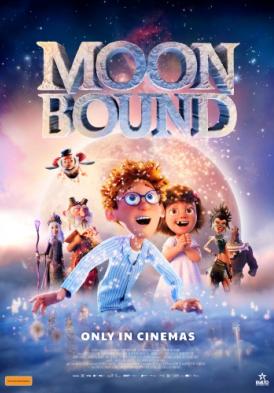 Not suitable under 4; parental guidance to 5 (mild crude humour, scary characters, sense of threat, sad themes such as parental death and loss of loved ones)

Based on the children’s classic fairy-tale, Little Peter’s Journey to the Moon, by German author and playwright, Gerdt von Bassewitz, Moonbound tells the story of Mr Zoomzeman (voiced by Howard Nightingale), a now elderly June bug. Mr Zoomzeman has spent his whole adult life searching for brave humans, who have never hurt any animals, to help him retrieve what he had lost many years ago. When a mean thief (Drew Sarich) cut down his home, a big beautiful birch tree, Mr Zoomzeman asked the Night Fairy (Cindy Robinson) for help. The Night Fairy banished the thief and his two accomplices to the moon, tragically, along with the birch tree, one of Mr Zoomzeman’s arms, and his newlywed wife, Mrs Zoomzeman. When Mr Zoomzeman meets young Anne (Lilian Gartner), and her brother Peter (Aleks Le), he knows he has found the chosen humans and together they venture on a fantastic journey to the stars, to stop the evil Moon Man once and for all, and to retrieve Mr Zoomzeman’s arm and birch tree, and lost love.

Moonbound is a sweet adaptation of von Bassewitz’s classic story of two brave and selfless young children who go on a fantastic journey to help a little animal friend. While there are some clichés (e.g. a spirited, playful little sister who annoys her more sincere, older brother; a gang of bullies who pick on the new kid at the school; a ruthless villain who seeks vengeance and wants to rule the universe; complete with two rather dumb and clumsy henchmen), the movie features relatable, funny, and quirky characters and positive role models, and contains a heap of positive messages. The pace of the movie is quick, and the story line complex, so very young children may lose track or interest. Because of that and due to some sad and scary themes (facing an evil villain, leaving home, losing loved ones etc.), the movie is most suitable for a family audience with children over 4, with parental guidance for children aged 4-5.

The main messages from this movie are that is important to look out for one another; to be persistent; and to follow one’s dreams.