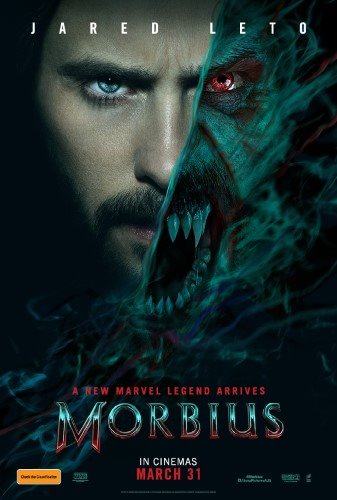 Young Michael Morbius (Charlie Shotwell) spent much of his childhood locked away in a hospital undergoing blood transfusions three times a day just to keep him alive. When young Milo (Joseph Esson), who suffers from the same incurable condition, arrives the two quickly become friends. Their bond is only deepened when Michael, thinking fast, uses a pen to repair a malfunctioning machine that is keeping Milo alive. Recognising his genius, Dr Nicholas (Jared Harris) arranges for Michael to receive a scholarship to study medicine at a prestigious school. Michael promises Milo that they will always be friends and that he will stop at nothing until he has found a cure that will save them both. 25 years later, at an elusive cave in the mountains of Costa Rica, Dr Michael Morbius (Jared Leto) locates a breed of bats that he believes holds the key to their survival. After numerous trials, and aided by his lovely colleague Dr Martine Bancroft (Adria Arjona), it looks like he has finally succeeded, except something goes terribly wrong. Michael mutates into a violent, bloodthirsty monster who is unable to control his emotions or urges. Physically he is healed as long as he continues to consume blood but he is horrified by what he has done and disgusted by what he has become. Michael refuses to inject Milo (Matt Smith) with the same serum, telling him that it is a curse, not a cure but Milo doesn’t listen and injects himself anyway. Michael learns to control his urges and harness his new powers while Milo kills indiscriminately, wreaking terror and havoc on strangers and loved ones alike. With time running out, Michael develops a serum that will end the terror once and for all but will he be able to inject it before it is too late?

Morbius is an action film based on a character from the Marvel comics. There are numerous special effects and lots of violence but little or no consequences arising from the carnage. As a result this film is best suited to older teen and adult audiences.

The main message from this movie is that in the eternal battle of good versus evil, there will be inevitable casualties but that ultimately, good will prevail.