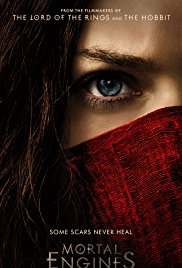 Not recommended under 13 due to graphic violence and frightening themes.

After quantum weapons destroy most of human civilisation, people are forced to survive on moving cities that stalk the desolate earth in search of weaker cities to attack and raid for resources.  When the mysterious Hester (Hera Hilmar) boards the mega-city of London, she attempts to kill Thaddeus Valentine (Hugo Weaving), the poster-boy for the city’s rejuvenation project.  After her plot is foiled by the well-intentioned but ill-fated Tom (Robert Sheehan), they are forced to join together to uncover Thaddeus’ plan and stop him before he destroys them all.  This becomes all the more difficult when a terrifying bionic-human bounty hunter, Shrike (Stephen Lang), escapes his ocean prison to hunt down Hester.  With the help of other like-minded fugitives, the duo race against time to stop Thaddeus’ plans for world domination, before it’s too late.

Mortal Engines is a film adaptation of the apocalyptic young adult novel by Philip Reeves, which combines elements of Mad Max, Terminator, and the world-building of Lord of the Rings, to create an enjoyable film for older children and adults alike.  Mortal Engines does well to keep the plot moving and the action flowing, made all the more watchable by the superb effects that viewers have come to expect from Producer Peter Jackson (Lord of the Rings).  Unfortunately however, its paint-by-numbers approach to young adult apocalyptic story-telling may leave some older viewers disappointed, particularly as the film feels much longer than its 2 hours and 8 minute run time.  Older children (over 13) are likely to enjoy this movie, but may find much of the action and violence mildly disturbing.  This film is not appropriate for those under 13, due to the graphic nature of the violence, and the frightening and existential themes.  Parental guidance is therefore recommended for viewers under 13.