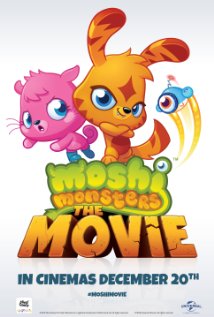 Suitable for individuals of all ages

Moshi Monsters is an animated children’s film that follows the adventures of Katsuma (Emma Tate), Poppet (Phillipa Alexander) and their friends as they hunt down a missing artefact. After a filmmaker comes to Monstro City in search of Moshi monsters to star in his documentary, Katsuma tries his hardest to catch the attention of Mr Scrawl and become the lead star of the film. However, a spanner is thrown into the works when the Great Moshling Egg discovered by the archaeologist Mr Bumblechops (Keith Wickham) is stolen. The criminal behind the theft is Dr Strangeglove (Ashley Slater), a man who intends to hatch the egg into a monstrous glump that will assist him in taking over the world.

Dr Strangeglove sends Katsuma and his friends on a quest to find the three items that will enable him to hatch the egg, believing he has tricked Katsuma’s gang into participating in his evil scheme. Katsuma and Poppet are aware of Dr Strangeglove’s true intentions, however, and set about collecting the three items with the knowledge that they intend to simply steal the egg back. After Dr Strangeglove captures them and takes the items, Katsuma manages to escape (with the help of his friend Mr Snoodle) and releases all of the previously kidnapped Moshi monsters, gathering them as an army to scare off Dr Strangeglove and his minions. Monstro City is saved, and the egg is back in the safe hands of Mr Bumblechops.

There is one scene in this movie that could scare or disturb children aged eight to thirteen:

Moshi Monsters is a light-hearted tale of adventure and personal growth. Although Katsuma is initially obsessed with being the centre of attention and demonstrating the multitude of ways in which he believes he is better than others, he soon learns that teamwork is more important than he could have possibly imagined. His friend Poppet teaches him that it is alright to lean on your friends for support, and that sharing the spotlight with others doesn’t make your contribution any less worthwhile. As there is little violence and few scary scenes this movie is suitable for children of all ages.

The main messages from this movie are the contrasting nature of individuals who strive to abuse their position and power, and those who help others in need for selfless reasons. It demonstrates that behaving selfishly does not pay off, and eventually leads to isolation and social rejection.